Rare and Unusual Books and Manuscripts from Thomas Cullen 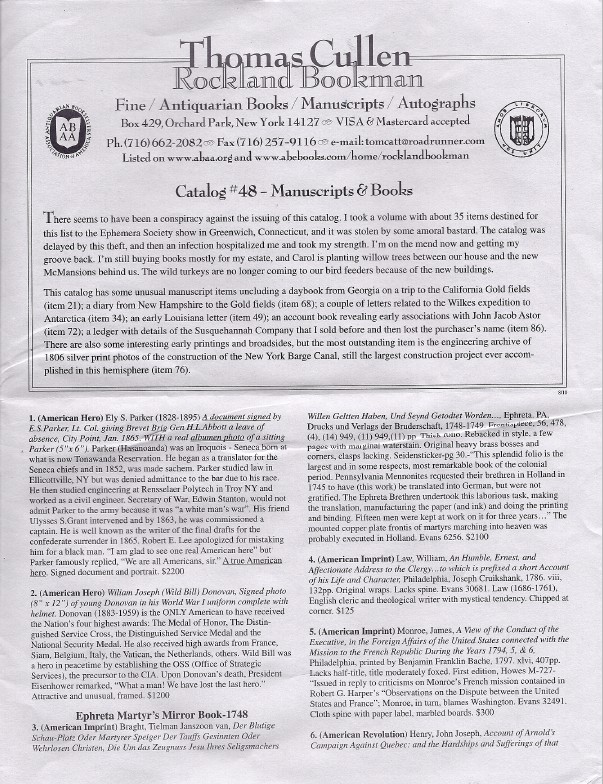 Thomas Cullen, Rockland Bookman, recently issued Catalog #48 - Manuscripts & Books. Cullen regularly comes up with uncommon material, much of it one of a kind. There are diaries, business ledgers, photographs, and other unique collections of material, along with printed material such as books and broadsides. A fair amount relates to Cullen's home area of western New York and adjacent Pennsylvania, but then again, there are centuries-old items from Europe to be found here too. In other words, you really need to see one of Cullen's catalogues to appreciate the type and variety of material he has to offer. Here are a few samples.

Item 95 is a book that takes us from the Second Great Awakening to the Great Disappointment. It is the prophecies of William Miller, Evidence from Scripture and History of the Second Coming of Christ, About the Year 1843. Around 25 years prior to this date, as a religious revival was starting to churn in Miller's upstate New York, his study of Daniel led Miller to conclude that Christ's second coming (or "advent") would occur around 1843. By the early 1830s, he was preaching this belief regularly, and as the year drew near, his followers grew. By 1843, it is estimated he had between 50,000 and several hundred thousand followers. Nothing happened in 1843, but Miller, using the Jewish calendar, figured the arrival could come as late as March 1844. When Christ did not return, another month was added in accordance with a competing Jewish calendar. Still no return. As that date too passed, one more delay was calculated, resulting in a final date of October 22, 1844. Miller and thousands of his followers gathered that day to be called up to heaven. With the dawn of October 23 came the Great Disappointment. Many, probably most of his followers, known as the "Millerites," returned to their earlier faiths. Miller and those who remained struggled to understand what went wrong. Miller lived until 1849, still believing the Second Coming was imminent, while others concluded the event expected on earth on October 22 occurred in heaven, or other explanations. Though there are no longer Millerites to be found, several Adventist churches arose from the ashes of the Great Disappointment, the largest of which, the Seventh Day Adventists, has around 16 million members today. Priced at $850.

Frederick Douglass, escaped slave turned orator extraordinaire, is remembered for his leadership in the abolitionist movement. After emancipation, he turned his voice to assisting the freedmen, along with civil rights causes, such as women's suffrage. In recognition of his contributions, Douglass was appointed to several government posts, one of which was Recorder of Deeds for the District of Columbia, so appointed by President Garfield. Item 13 is a deed from 1881 which was signed by Douglass ("Fred'r. Douglass") in 1881. $450.

Item 58 is a broadside for the auction of the estate of Thomas Sargent, Jr., of West Amesbury, Massachusetts. Mr. Sargent passed on in 1858. He was a house and carriage builder, so his estate consisted mainly of tools, wagons, and similar possessions for a skilled workman. Among the items were "Frames, Windows, Side-Lights, Doors, Stove, Grindstone, one fourth of a cow, Horse..." Huh? A quarter of a cow? Isn't that another way of saying steaks? Well, presumably what Mr. Sargent had was a one-fourth share in old Bessie, but the entire horse belonged to him. $450.

Item 76 is a massive archive of information concerning the construction of New York's Barge Canal in the early 20th century. Eighty years earlier, the state had taken on the huge construction project of building the Erie Canal. It linked Lake Erie with the Hudson River at Albany, 400 miles away. Moving products from the Midwest, mainly from farms, was prohibitively expensive at the time. The canal made it cost-effective to farm land in what was then still the Northwest. By the early 20th century, the Erie Canal was no longer able to carry the load so efficiently. Larger barges were needed, so New York State set about reconstructing its canal system. The result was what became known as the "Barge Canal," which included a partly rerouted Erie and three feeder canals. Included in this archive are 1,806 captioned photographs, most approximately 6" x 9". Also included are six ledgers pertaining to the canal survey. Today, the Barge Canal system (which is again known by its original names, the Erie Canal and three others) no longer carries much freight, trucks and trains hauling the cargo, but is widely used for recreational boating. $16,000.

Item 34 is a letter from a naval lieutenant to a Boston firm inquiring about a possible purchase of marine chronometers from Parkinson & Frodsham of London. This June 5, 1836, letter might seem insignificant, but the Lieutenant who made the request was Charles Wilkes. The reason for seeking chronometers, precise clocks which allow for determining longitude at sea, was that America was planning its first major sea expedition. Although Wilkes was not supposed to be commanding the United States Exploring Expedition, he was given command after the original choice, Thomas ap Catesby Jones, resigned. The expedition was launched under Wilkes command in 1838, and brought back much data on natural history, as well as conducting the greatest exploration of Antarctica to date. It also did much to establish the prestige of the United States on the world stage. Among the items taken on the trip were several of this firm's chronometers. $450.