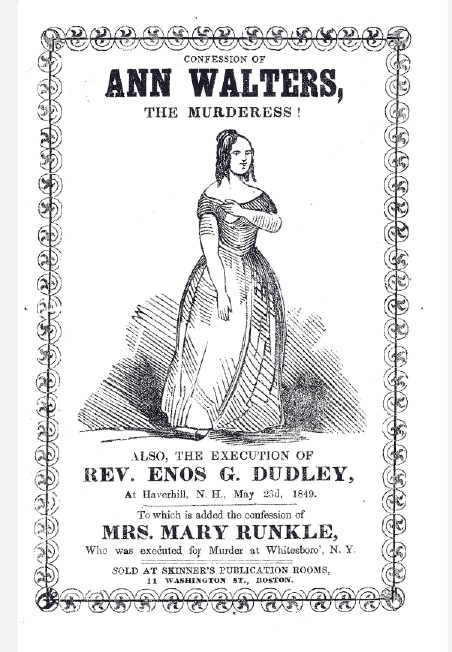 The deadly Mrs. Walters on the cover of Garrett Scott's latest catalogue.

Garrett Scott, Bookseller, has released Catalogue Twenty-nine, A Miscellany. The Ann Arbor based Scott specializes in the unusual. His books, pamphlets, and ephemera almost always meet one of the two standard meanings for "unusual," either uncommon or strange. You will not find much from Whitman or Longfellow in a Scott catalogue. However, if your tastes run to Richard Griffin, the early 20th century New York "poet" whose works may not be as well acclaimed as those of the previously mentioned gentlemen, but are infinitely more entertaining, this is your place. There are three books here from Griffin. Now for some of the material offered.

Richard Griffin certainly must qualify as one of the best of the worst when it comes to poetry. Griffin was not the standard "bad poet," such as England's legendary William McGonagall who wrote about serious topics of the day in the apparent belief that as long as the words rhymed, nothing else mattered. Griffin makes the transition from mere bad to very strange. As such, it's hard to discern whether he was pulling our leg or was a raving lunatic. Perhaps the best answer is that he was both. The total absurdity of some of his poems, and the strange but amusing photographs he took of himself, makes one think there was a joke here, or perhaps he was part of the dada movement of his day. On the other hand, such intentional absurdity is usually self-promotional, and Griffy never succeeded in promoting himself very well. His books were not bestsellers; he never achieved any recognition. His poems were self-published as no one else would touch them and his life is veiled in obscurity. He was apparently born in 1857, published and probably wrote his poetry from around age 60 and up (it is unclear what he did before then), put out his last book in 1931 (he would have been 74 then), and disappeared from history. Where or when he died is unknown (Griffin's pictures can be seen on the next two pages of this review).

Item 40 is Griffin's The Lobster's Gizzard and Other Poems, published by the author in 1916. Along with the title piece, it contains such entries as Water on the Brain, The Woman Without Any Ears, The Round-Shouldered Licker, and The Latter Day Saint, an ode to multiple marriage:

"The first girl I married, sweet Lulu,
Oh my! Such a dumpling, one corker,
High stepper, stuck up like a Zulu,
But also a nice little porker."

The title piece, Scott explains, is a tale of a man encouraged by a wizard to consume the gizzard of a magical lobster. One thing we learn from this poem is that there are several words that rhyme with gizzard - wizard, lizard, blizzard. Griffin uses them liberally. $150.

The charming young lady on the cover of this catalogue is Ann Walters, the lead character in the Confession of Ann Walters, the Murderess! Walters was a most evil woman, a tavern keeper on the Delaware-Maryland border. She did away with her husband and a baby, and then began running a gang of killer-thieves who did the same to some of the travelers who stopped at her tavern. It was all a very sensational tale, which lacked for but one thing - the truth. There was no Ann Walters, but why let truth stand in the way of a good story? Item 100. $450.