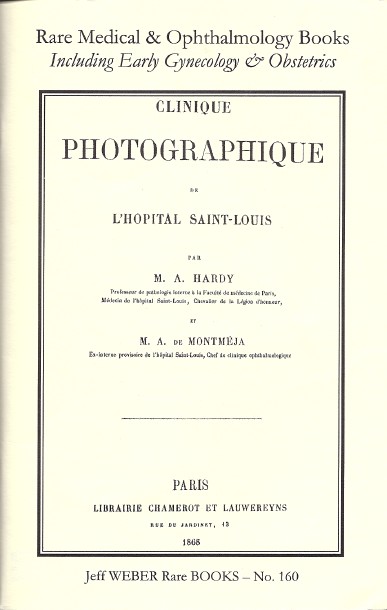 Jeff Weber Rare Books is offering a catalogue of Rare Medical and Ophthalmology Books, Including Early Gynecology and Obstetrics. The latter part of that title may mean that women readers cringe a bit more at some of these old books than do male readers. Antiquarian medical practices are not always a part of the "Good Old Days" anyone would wish to relive. Nonetheless, there is much to be learned from the books in this catalogue, as it retraces the advancements in medicine and science along the way that led to our far more sophisticated knowledge and practices today.

We start with an appropriate author for the specialties of this catalogue, as author Johann Hermann Baas was both a general physician and an ophthalmologist. However, this book definitely uses a very broad brush. It is Outlines of the History of Medicine and the Medical Profession. This is the first edition in English of a book originally published in German, and it is described as "the first important English language history of medicine." Baas is very thorough, starting with the medical practices of ancient Egypt, and carrying through to the "present," which at the time was the late 19th century. As the translator explains in his preface, the purpose of the book is neither to be so "superficial" as to disappoint the reader, nor so voluminous as to make him "weary." Item 5. Priced at $125.

The early exploration of the world and early trade by Europeans was extremely dangerous. The sailboats used were tiny and unsafe by any modern standards, dangers lurked at every corner from storms, reefs and rocks, pirates and privateers. Yet despite all of these dangers, nothing came close to threatening sailors' lives as did disease. Terribly unsanitary conditions along with poor diet led to epidemics on board. Most notable was scurvy, caused by a lack of vitamin C, but there were many others as well. Item 146 is an early book specifically on the diseases of sailors: De morbis navigantium... by Louis Rouppe. This first edition was published in 1764, shortly before Cook's groundbreaking discoveries for dealing with scurvy. The author was a Dutch naval physician. Item 146. $750.

Here's a good reason for Memphis to be known as the home of the blues, though it predates blues music: A history of the yellow fever. The yellow fever epidemic of 1878, in Memphis, Tenn... by John McLeod Keating, published in 1879. In the spring of 1878 there was an outbreak of yellow fever in the Caribbean. It spread through trading ships to New Orleans, and from there, with either fleeing people or cargo, inland to Memphis. As disease spread through the city the people of Memphis attempted to escape. They filled up every railroad car, carriage, wagon, and everything else they could find. Some communities welcomed the refugees; others stationed armed guards at their borders to keep the feared disease carriers from their streets. Around 25,000 residents escaped, 20,000 remained. Of those that stayed, 17,000 contracted the disease. While 70% of the 20,000 who remained were black, less than 10% of them died, but 70% of the whites who stayed died. In his book, Keating, who was born in Ireland but emigrated to Memphis two decades earlier, provides a history of the yellow fever, and then goes into details about the local epidemic. He includes a list of the doctors and donors who helped, and of the dead. Item 74. $100.

Item 62 is a scientific rather than a medical work. It is Untersuchungen ueber die Ausbreitung der Elektrischen Kraft. This is the 1892 first collected edition of the papers of Heinrich Hertz. Hertz conducted the first experiments to definitively prove the existence of electromagnetic waves. Creating them was easy, but designing a receiver was harder. Hertz managed to set up an experiment whereby the waves would initiate a spark from a distance, despite there being no apparent connection between the cause and effect. It demonstrated that there were invisible waves passing through the air. Hertz apparently didn't think any of this was of much more use other than as a curiosity, but it was a founding moment in the development of radio and wireless communications. $1,250.

Item 33 is an 1824 first edition of William Dewees' A Compendious system of midwifery, chiefly designed to facilitate the inquiries of those who may be pursuing this branch of study. We are told that "Dewees was much in demand for his services, and Kelly notes that he 'was so famous that no parturient woman of the time considered herself safe in other hands.'" For those unfamiliar with the word "parturient," it means about to give birth. Dewees' work was as popular as his personal services, this book running through 12 editions. $150.