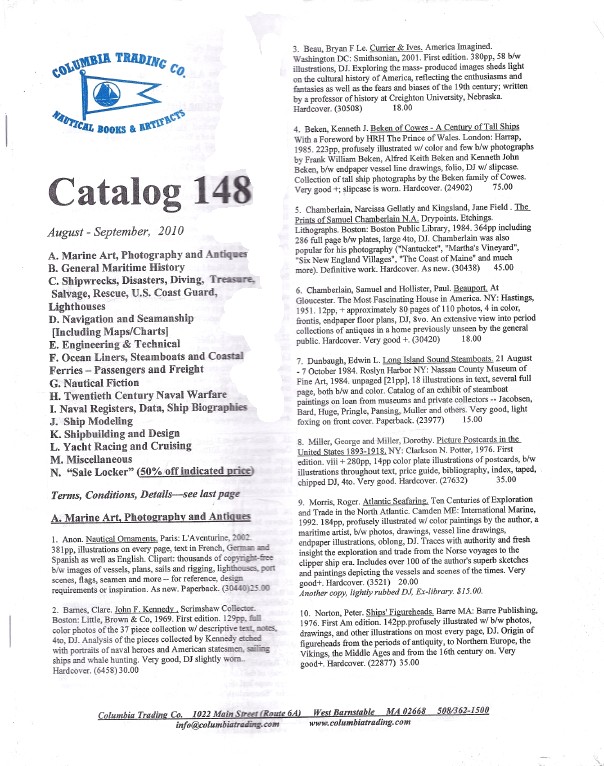 The Columbia Trading Company of West Barnstable, Massachusetts, has issued its Catalog 148 of Nautical Books and Artifacts. It is filled with works relating to the sea. From battleships to yachts, important voyages to personal sailing, it's all here. There are even a few items related to inland boating, such as navigation along America's rivers, but most of the waterways underlying these books are heavily salted. Now it's time to dip a toe into this catalogue to see what type of material can be found.

Travel at sea has long been associated with both great discoveries and enormous danger and tragedy. Item 294 is an account of the latter: The Lusitania's Last Voyage. Being a Narrative of the Torpedoing and Sinking of the R.M.S. Lusitania by a German Submarine off the Irish Coast, May 7, 1915. Britain and Germany were at war when the British ship Lusitania left New York on May 1, 1915, with approximately 1,800 passengers and crew on board. It was a civilian passenger ship, though it was carrying some small arms. America, at the time, was neutral, as neither President Wilson nor the American public had any desire to be dragged into a European conflict. However, the Germans had recently announced that they would consider any ships entering English waters fair game for its new U-boats (submarines), and warnings were issued that the Lusitania could be a target. It is doubtful that most passengers, including many Americans, took this too seriously, but on May 7, a single torpedo from a German submarine hit with deadly results. The Lusitania listed dramatically, and not too long after sank. The extreme tilt made it difficult to launch the lifeboats. In all, almost 1,200 of the passengers and crew died. It was a successful mission for the Germans militarily, but a public relations disaster. Anger was great in America, although the desire to stay out of war still prevailed, and Wilson would win reelection in 1916 on a "kept us out of war" platform. Nonetheless, American opinion was now tilting decidedly to the British side, and the President was aiding England, leading to further disputes with Germany and eventual American entry into the war. Charles Lauriat's account of the Lusitania was published in 1915, the year of its sinking, and well before America's participation in the war. Priced at $40.

Here is another great war-related tragedy at sea, though this one came on fresh water, and was the result of carelessness and greed rather than an attack. The loss of life was greater than that on the Lusitania or the Titanic. At the end of America's Civil War, the Union needed to move thousands of prisoners of war from southern prisons back home. Naturally, both the Union and the prisoners wanted them to return as quickly as possible, and there was money to be made on the transportation. The steamship Sultana, with a capacity of 376, took on a load of 2,300 returning soldiers. It had a leaky steam boiler, but the owners were not about to delay their schedule to repair the boiler as they feared they would lose their load of passengers to competing ships. At $5 a head, the Sultana was a money machine. It picked up most of its passengers at Vicksburg, and near Memphis, the boiler exploded. Most of the weakened ex-prisoners drowned, some 1,700-1,800 of them dying in the wreck. Item 237 is Gene Salecker's 1996 account of this great tragedy, Disaster on the Mississippi. The Sultana Explosion, April 27, 1865. $20.

Here is an item for collectors of nautical works or of Robert Louis Stevenson. The title is In The South Seas. An Intimate Photographic Record. Though published in 1987, nearly a century after Stevenson died, it contains photographs and letters written from sailing voyages in the South Pacific by Stevenson and his family between 1888 and 1890. Item 536. $25.

Item 105 is a 1955 facsimile of an ode to Sir Francis Drake, naval hero or brutal pirate, depending on your point of view. Drake was the English privateer who captured many Spanish ships and murdered more than his share of men along the way, in service to his Queen. He was also the first Englishman to accomplish a circumnavigation of the world. In 1587, poet Thomas Greepe published this ode to Drake's work: The True and Perfecte Nevves of the Woorthy and Valiaunt Exploytes, Performed and Doone by that Valiant Knight Syr Francis Drake. You would think by 1955 they could have cleaned up the spelling, but they stuck to the letter of the first edition. $75.