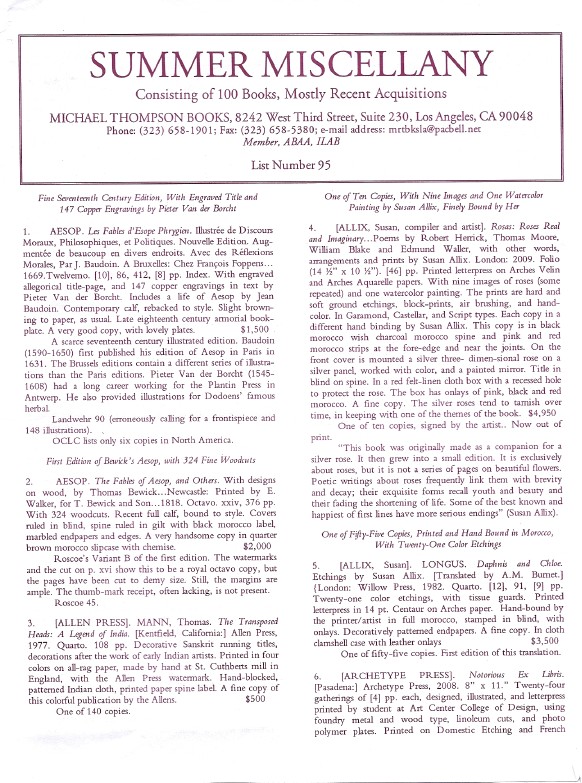 Michael Thompson Books of Los Angeles has issued a Summer Miscellany, Consisting of 100 Books [101 actually], Mostly Recent Acquisitions. This is truly a miscellany. The topics and types of books vary so widely that it is impossible to put a label on them. You will need to sort through this catalogue for yourself to understand what is here. For now, we will provide a few samples, not particularly reflective of the whole.

Most Americans are familiar with Alexis de Tocqueville's Democracy in America, a favorable look at American political institutions by the visiting Frenchman who came during the 1830s. However, de Tocqueville wrote one other major tome a couple of decades later, meant to be a three-part set. Unfortunately, it was cut off at one by his untimely death. Item 85 is the first edition (in French) from 1856 of his L'Ancien Regime et la Revolution. Originally, de Tocqueville planned to carry his work about his native France from the Old Regime through the time of Napoleon, but never got past the Revolution. Priced at $1,250.

Here is a book that would not likely be so popular today, but it was well received during its era: The American Ladies' Memorial: an indispensable home book for the wife, mother, daughter, in fact useful to every lady throughout the United States. This was much about the proper role for women in 1850. Indeed, that point was not necessary to state. It simply covers activities that would have been appropriate for a woman at the time, such as dressmaking, embroidery, etiquette, floral arrangements and such. Item 95. $650.

Item 40 is a Traite contre les danses et les mauvaises chansons. This translates to a treatise against dancing and bad music. You might think it is a book about disco, but its date of 1769 would seem to preclude that. Author Francois Louis Gauthier was a curate who, like most churchmen of his time, did not believe in having fun, considering music and dancing to be immoral. $650.

Item 56 is an account of one of those geographic myths, that, in reverse of the normal order, arose after the correct understanding of the land, rather than before it. In the 16th century, explorers recognized that California, or at least Baja California, was a peninsula. The great maps of Mercator and Ortelius displayed it correctly. However, in the early 17th century, someone became confused. Maps began to show California as being an island. By the latter part of that century, that was the general understanding. However, missionaries settling the area recognized its true nature, and by the early 1700s, maps again began to display California as it truly is. The last of the bad maps disappeared later that century. Item 56 is John Leighley's California as an Island. An Illustrated Essay...showing California as an Island 1622-1785. This book, with plates and a bibliography of California-as-an-island maps, was published by the Book Club of California in 1972. $1,250.

Speaking of maps, item 92 is the definitive cartographic history of the American West, Carl Wheat's Mapping the Transmississippi West. 1540-1861. This includes six volumes of facsimile maps of the very old to more recent old west, published from 1957-1963. $3,500.

Here is a work of fakes as unreal as island California, but some clever ones nonetheless. Item 6 is Notorious Ex Libris, published in 2008. It was printed by students at the Art Center College of Design in Pasadena, California. The students created imaginary bookplates of various notable and notorious individuals, such as Al Capone, George Armstrong Custer, Madonna, and the Marquis de Sade. $250.