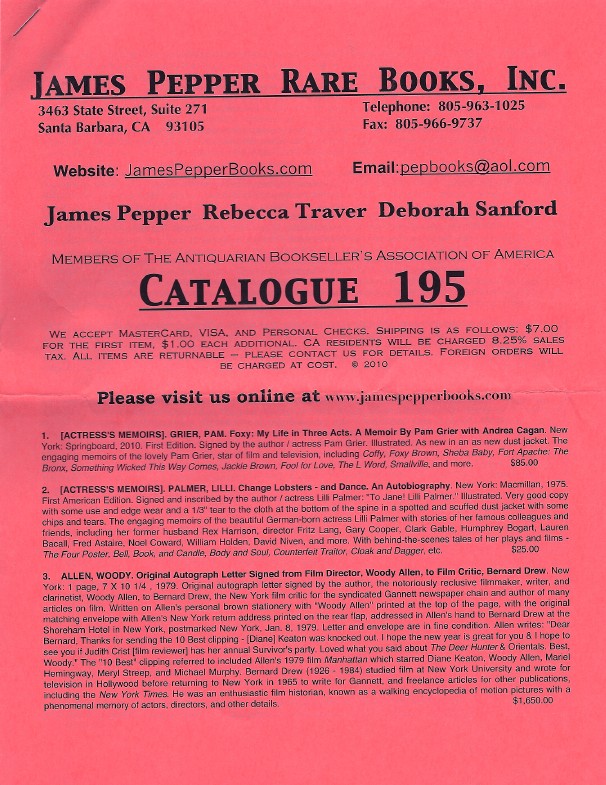 James Pepper Rare Books has issued Catalogue 195. The latest in their almost monthly releases, it follows the norm, offering works related to film and theater, detective fiction and mystery, sports, and literature. These are primarily books you know, or come from the hand of personalities you know. Whether the authors made their name through writing or other endeavors, the works mostly come from people whose names achieved recognition on the world stage. Here are a few.

We can assure you everything else in this catalogue is considerably less expensive, but we will start with far and away the most pricey item you will find. If your budget permits, you may be intrigued. Item 126 is a copy of the first edition, first issue of Dracula, by Bram Stoker. Vampires are all the rage today, but this is the one that, for better or worse, started it all. This copy is inscribed by Stoker to Frank A. Munsey, a notable magazine publisher of the day. Pepper believes Stoker was likely hoping Munsey would serialize his story in one of his magazines. If so, he did not succeed. Nevertheless, Stoker did just fine with his novel. Priced at $75,000.

Item 16 is a 1925 biography of America's first celebrity athlete, the great boxer John L. Sullivan. Sullivan crossed between the bare-fist era and that of gloved boxing. He is regarded as the last bare-fisted champion, and the first with gloves, though there weren't officially recognized titles in that era. There was by the time he lost his title and suffered his first defeat, to "Gentleman Jim" Corbett in 1892. R.F. Dibble's biography of the Boston fighter is entitled John L. Sullivan. An Intimate Narrative. $45.

Next is an interesting item from the early days of the blacklisting era. It is a set of three LP records, Hollywood Fights Back, along with the pamphlet Committee For the First Amendment. The album contains the ABC Radio broadcast of the same name, recorded on October 26, 1947. Among the members of the committee were Humphrey Bogart, Lauren Bacall, Edward G. Robinson, John Huston, Katherine Hepburn, Judy Garland, Henry Fonda, Lucille Ball, Groucho Marx, Lena Horne, and Frank Sinatra. Nevertheless, the blacklisting movement grew, and spurred on by Senator Joseph McCarthy, the paranoia consumed many careers before it ran its course. This set of records belonged to Alexander Knox, a Canadian born actor who was nominated for the Oscar for best actor in 1944 for the title role in Wilson, an acclaimed but financially unsuccessful movie about the 28th president. Knox was blacklisted, but moved to England where he continued his career. Item 76. $375.

What do Batman, Dick Tracy, and Bugs Bunny have in common, other than the obvious that all are cartoon characters? The answer is that each was drawn by its artist on the sheet of paper offered as item 83. Bob Kane has drawn his creation, Batman, who rose from the comics to become a star of television and film, and a leading superhero today. Dick Tracy was drawn by his creator, Chester Gould. In his day, police detective Tracy graced the comics of countless newspapers, and was the far more familiar figure than the Caped Crusader. Time faded his popularity though Tracy can still be found in some newspapers to this day. Bugs, drawn by animator Friz Freleng, is a timeless character, popular then, popular now. $1,250.

Item 26 was a somewhat presumptuous title at the time: How to Live to Be 100 - Or More. It was written by the vaudeville, later radio, television and movie actor/comedian George Burns. It was published in 1983, when Burns was no spring chicken, but hardly 100 either. He was 87 at the time. His advice must be good as George Burns did make it to 100 and 49 days more. This copy of his book is inscribed to actress Carol Channing. $200.