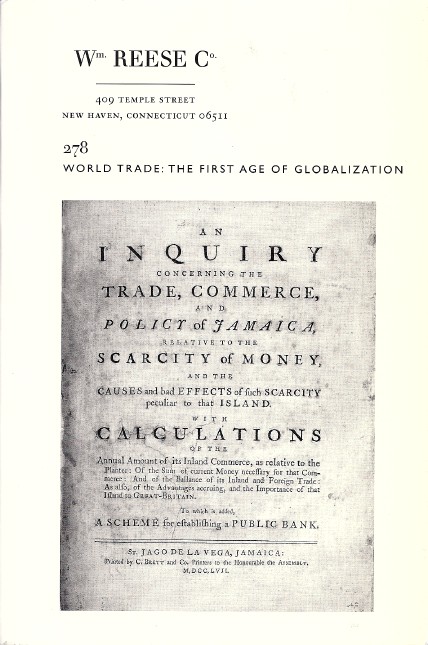 The latest catalogue from the William Reese Company does not offer their typical collection of Americana. This one is focused on the world. More specifically, it is centered on trade and commerce. Nations have been trading with one another for as far back as history records, but world trade increased exponentially in the age of discovery. Europeans visited foreign lands and set up trade relations. Then, they did even better. They took over many of those lands, turning them into colonies, so they could control and dominate their trade. It was an effective strategy, though its effect on the locals who were colonized, or even turned into slaves, was not so pleasant. Here are some of the items offered in Reese's 278th catalogue, World Trade: The First Age of Globalization.

Although India would in time become a British colony, the first European outposts on the subcontinent were those of the Portuguese. There had been overland trade with India in the 15th century, but the Turks were making that increasingly difficult when Portugal sent Vasco da Gama out to find a sea route in 1497. It was the first time Europeans went beyond the African coast, and da Gama succeeded in his mission. Through the first half of the 16th century, the Portuguese set up trading missions all along India's west coast, with da Gama succeeding in enforcing Portuguese interests, though with much brutality. There are only a handful of accounts of the Portuguese role in India in the period of 1510-1540. This is one of them: Commentarii Rerum Gestarium in India Citra Gangem a Lusitanus Anno 1538... by Damiao de Goes, published in 1539. This work describes the Portuguese activity and, in particular, their battles with the Turks for influence in the region. Item 77. Priced at $16,500.

While the Portuguese were moving east, the Spanish were moving west. The Pope had divided the New World longitudinally, giving Portugal Brazil, and Spain everything else in the Americas. That was a good deal for Spain, but in time, England, having broken with the Vatican, was in no mood to honor boundaries assigned by a Pope they did not recognize. As British power grew, the Spanish were forced to make concessions. Item 193 is The Articles of Peace...in a Treaty at Madrid. This is the first English language publication in 1630 of the Treaty of Madrid, whereby Spain acknowledged England's right to occupy and trade with places in the Americas not already colonized by Spain. Item 193. $1,750.

British authority in the Americas would have its time limits too. Item 199 is a copy of the Treaties of Amity and Commerce, and of Alliance Eventual and Defensive, Between His Most Christian Majesty and the Thirteen United States of America. "His Most Christian Majesty" was King Louis XVI of France, eventually beheaded by his people, but that's a story for another day. This is the first printing of a treaty between the United States, still considered but rebellious possessions by the British, and a foreign power. The year was 1778, and the French were all too willing to stir up any mischief they could with their longtime rivals and enemies. While the French won few of their battles on the ground, this would prove to be an enormous success. With the aid of French naval power, the American colonists would be able to overthrow their masters and gain independence from England. $35,000.