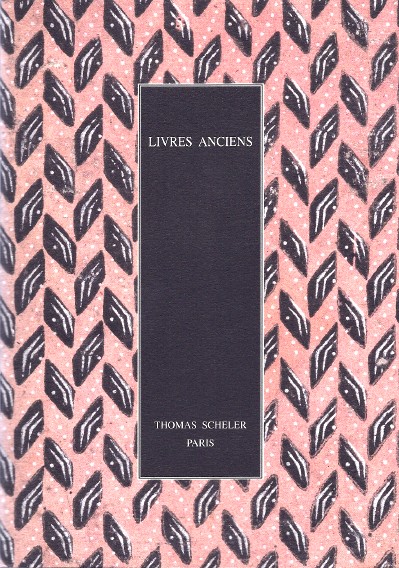 Librairie Thomas-Scheler has issued its 41st catalogue of Livres Ancien, or Antiquarian Books. This catalogue is written in French, and most books are also in the French language, though there are a good number of titles in Latin as well. Many of these books are quite old. Subjects are varied, ranging from travel to science, mathematics, medicine, literature, politics, and whatever else was on people's minds a few centuries ago. Here are some of these works.

Item 30 is a first edition account of one of the most important of French voyages, the first to make it around the world: Voyage autour du mond, par la fregate du Roi La Boudeuse... by the explorer Louis de Bougainville. Bougainville established a French colony on the Falkland Islands (only to have France cede them to Spain in the interests of maintaining peace). Heading further west, he discovered some Pacific islands, and thought he discovered Tahiti, only to find someone else had beaten him there. However, Bougainville's description of Tahiti as some sort of island paradise remains a part of the island's image to this day. If Bougainville himself is not that well known outside of France today, his name is more familiar. His botanist named a plant he discovered in South America for his captain - the bougainvillea. Published in 1771. Priced at €6,000 (euros, or about $7,736 in U.S. dollars).

Item 4 is the 1751 French edition (following the 1748 first in English) of another voyage around the world, that of George Anson. Anson was not a true explorer like Bougainville, and probably a lot less popular with his men, though he came home to England a hero in 1744. He was the captain sent out with five ships to harass the Spanish in South America. He lost all but one of his ships, and most of his men died, but his capture of a Spanish ship laden with treasure near the end of his voyage enabled him to return home a wealthy man. The book is entitled Voyage autour du monde, fait dans les annees MDCCXL... This book comes with the account of some of his men who made a daring escape of a shipwreck of one of Anson's ships, along with an arduous journey to eventual rescue: Voyage a la Mer du Sud... published in 1756. €6,500 (US $8,388).

If you think a trip to the dentist is scary today, what must it have been like two centuries ago? Here is the answer: L'art du dentiste ou Manuel des operations de chirurgie... This is an 1802 treatise by Louis Laforgue on the art of dentistry, including dental surgery. Dental surgery in the era of crude instruments and no novocaine or antibiotics is just one reason not to want to return to Napoleonic times. Item 136. €1,200 (US $1,552).

We don't know what language his dogs spoke, but item 201 is the first French edition of Le travail des glandes digestives, or the work of the digestive glands, by the great Russian scientist Ivan Petrovich Pavlov. Pavlov's dogs were the ones whose digestive juices began flowing at the ringing of a bell, after they learned that the bell signified dinnertime. The work described in this book earned its author the Nobel Prize for Physiology and Medicine in 1904. €1,000 (US $1,295).

Leonhard Euler was a prominent Swiss mathematician and physicist of the 18th century, often regarded as the greatest mathematician of his time. He wrote an enormous amount of material most of us couldn't possibly understand. However, he did publish a book that was designed to help the layman understand complex concepts. It's called Lettres a une Princesse d'Allemagne, sur divers sujets de Physique et Philiosophie. The title translates to Letters to a German Princess. Frederick the Great had asked Euler to teach his niece, the Princess of Anhalt-Dessau, some basic science. He wrote her a series of letters which could be called the Popular Science of the day. In it he explains such diverse topics as why the moon looks larger on the horizon, the sky is blue, and why the tops of mountains are cold. His letters were published in book form, a book very popular in its day. This French edition was published in 1812. €850 (US $1,100).