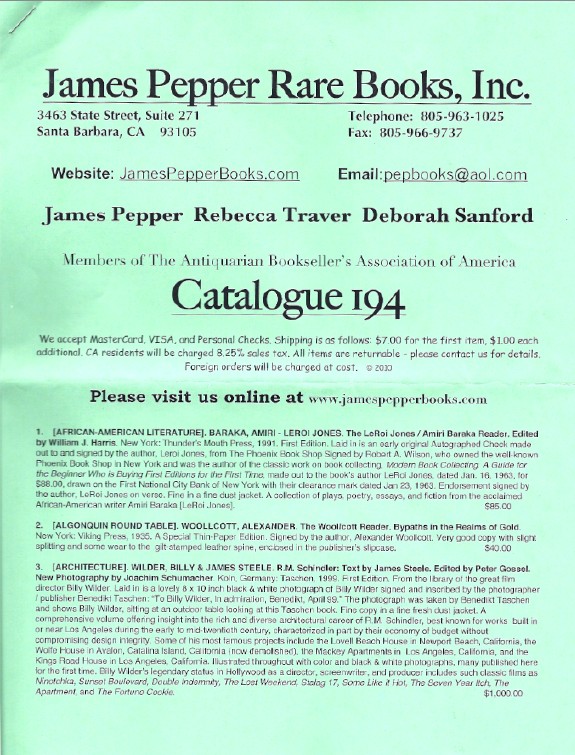 The latest from Hollywood and beyond from James Pepper Rare Books.

James Pepper Rare Books has issued Catalogue 194. It follows their usual format, being particularly heavy in material related to Hollywood and film, but with a healthy assortment in the fields of literature, science and detective fiction as well. Almost every month Pepper releases a new catalogue, and they come with many new and interesting items not seen before. Here are a few of them.

We will start with a first edition, first printing of one of the most collectible works of 20th century American fiction, Harper Lee's To Kill A Mockingbird. Little needs to be said to describe this very familiar tale of justice in the pre-civil rights era South. Published in 1960, it was Harper Lee's only novel, the ultimate example of quitting while you're ahead. This copy has the ownership stamp of Annie Laurie Williams. Ms. Williams was Lee's motion picture agent. She had already sold movie rights to several notable books, including Gone With The Wind and The Grapes of Wrath. She negotiated the rights to Mockingbird to Universal Pictures, which resulted in the great film rendition starring Gregory Peck. Item 93. Priced at $12,500.

Item 107 provides an odd combination of politics and theater. It is an inscribed copy of Michael Genovese's The Nixon Presidency: Power Politics in Turbulent Times, published in 1990. This is a comprehensive biography of Nixon, placing him within the context of his times. Genovese has inscribed this copy to actress Carol Channing, best known for playing the lead role in the Broadway production of Hello, Dolly! Channing, along with Steve McQueen, Barbra Streisand, Gregory Peck, Bill Cosby, Joe Namath, and many others appeared on Nixon's infamous "enemies list." Genovese writes, "To Carol Channing and Charles Lowe [her husband], two of Richard Nixon's favorite enemies!" Ms. Channing's name appears in the book too. $200.

Here is a book from a man who was not noted as a writer, actor, politician, or anything else that makes headlines in the newspaper, and yet his name is probably familiar to most Americans, though he died many years ago. Item 133 is a copy of the 1956 book Lines of a Layman, by J.C. Penney. Yes, J.C. Penney is not a made-up store name, but that of a real person. Mr. Penney founded his first store in rural Wyoming at the beginning of the 20th century, seeing it grow to one of America's largest retailing chains over the course of his life. This copy of his experiences is inscribed by Penney "To My Old Friend and Associate, Jim McDonald." $95.

Next we have an item that is hardly a book, but is an unusual piece of boxing ephemera. It is a ringside seat ticket to one of the most famous boxing matches of all time, the 1910 championship bout between Jack Johnson and James Jefferies. Jefferies was a dominant heavyweight boxer at the turn of the last century, at 6 feet and 225 pounds huge for his era. He retired undefeated in 1905. Three years later, Jack Johnson, a black man, avoided by most boxers because of his race, managed to get a title shot, which he won. Many whites were outraged, and Jefferies was convinced to make a comeback to regain the title for his race. He was the original "Great White Hope." The bout took place in Reno, Nevada, as most states wanted no part of this interracial fight. As a result, thousands descended on Reno, almost entirely white, to see their fighter regain the title for their race. As this ticket attests, the fight generated enormous interest (its price was $50, an outrageous sum of money in 1910). The crowd was sorely disappointed, as Johnson battered Jefferies into submission after 15 rounds. The ticket states, "World's Heavy-Weight Championship...Purse $101,000.00 - Jefferies - Johnson - July 4th 1910 - $50.00 - Ringside - Admit One." Item 13. $3,500.

The world of sports has always had its problems, but in today's world of astronomical salaries, often for mediocre or underperforming athletes, it seems that issues have only been magnified. Even 20 years ago, legendary sportscaster Howard Cosell was able to write a book about What's Wrong With Sports. Published in 1991, it recounts sex scandals, corruption, bigotry and drugs in professional sports. And this was before anyone even knew about steroids. It seems like the problem has only become worse. This copy of Cosell's book is inscribed to Hollywood columnist Army Archerd. Item 26. $85.