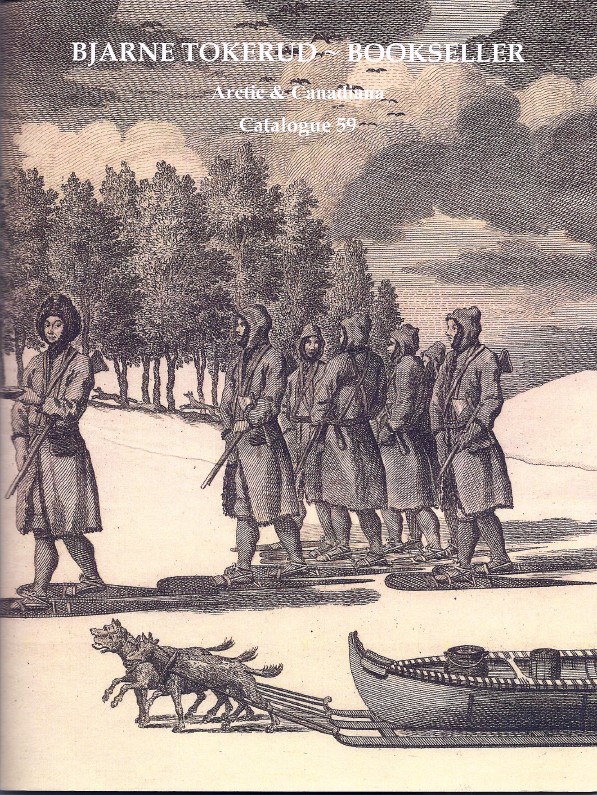 The Arctic and Canada from Bjarne Tokerud Bookseller.

Bjarne Tokerud Bookseller has issued a Summer 2010 catalogue of Arctic and Canadiana. This is a collection filled with travels and expeditions to the far north and the very far north. Some journeys were undertaken by great explorers, others by ordinary people out to experience adventures in a world where fellow humans are seldom found. So, set your compass on North as we take a look inside this new catalogue.

Item 1 is a look at British North America published in 1769, The American Traveller: Or, Observations on the Present State, Culture and Commerce of the British Colonies in America... This copy is signed by author Alexander Cluny. Cluny spent 30 years in America as a merchant, much of it in northern Canada. He became very familiar with the operations of the Hudson's Bay Company and divulges much sensitive information about it. He also charts a route for what he believed to be the Northwest Passage, from Repulse Bay to open waters to the west. Priced at $22,500 (all prices are in Canadian dollars, which are currently worth around $0.97 in U.S. currency).

Item 27 is a Narrative of the North Polar Expedition. U.S. Ship Polaris, Captain Charles Francis Hall Commanding. The work was edited by C.H. Davis and published in 1876. Hall was a newspaper publisher who became fascinated with Arctic exploration. He quite literally stopped his presses and in 1860, set out on his first journey to the Arctic. He hoped to find some relics from the missing Franklin expedition of over a decade earlier, and thought some of its crew might still be alive. He took off on a second journey in 1864, and this time came to realize there were no survivors to be found. In 1871, Hall secured financing from the U.S. government to make an attempt to reach the North Pole. The journey was a miserable failure. The men came to bickering, and Hall made more than his share of enemies. Only a few months into the trip, Hall became violently ill after drinking a cup of coffee. He suspected someone was attempting to poison him, and that is certainly a strong possibility. He rallied for a few days, but then took a turn for the worse and died. The mission continued, but the Polaris eventually became stuck in ice, and feuding groups of men broke into two groups, each eventually making their way home after long and difficult journeys. Little was accomplished by the mission. $700.

Item 6 is a photograph album of what was not an official expedition, but a daring trip by a couple of amateurs (though with the help of some native guides). Florence Tasker and her husband, Stephen, of Philadelphia, set out on an Exploration of Ungava Peninsula Primarily by Canoe in 1906. The Ungava Peninsula is the far northern part of Quebec, a place almost always cold and damp, mostly devoid of trees, but not devoid of mosquitoes, at least during its brief cool summer. Very few people live up here and there are no roads, even today, to get around. The Taskers began in Ontario, canoeing down the Moose River to Moose Factory (most places in Canada are named "Moose" something) and then took a steamer to the east coast of Hudson's Bay, in Quebec. They then proceeded up the coast of the Bay to a point where the local Eskimo refused to go any farther north, and then traveled inland. The trip lasted five grueling months. Mrs. Tasker wrote an article about their trip which appeared in Field and Stream in 1908. Offered is their photo album from this journey. $12,500.