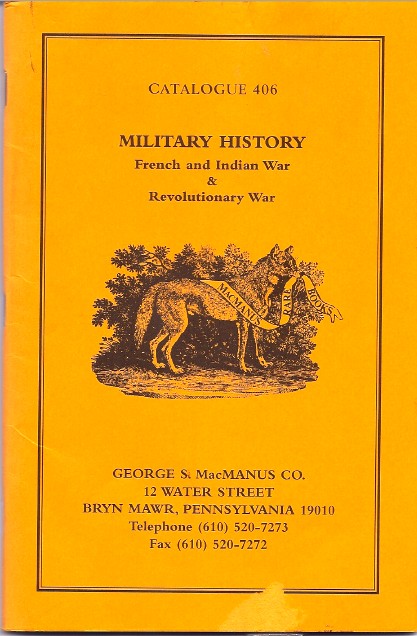 The George S. MacManus Company has issued their Catalogue 406. Military History. French and Indian War & Revolutionary War. It all happened so fast. The American colonists and British soldiers fought together to rid the North American continent of the French. Their success was total, and in 1763, the Treaty of Paris removed the French, while the British and their colonists celebrated their victory. What could possibly go wrong with this relationship? Yet, just 13 years later, the colonies were in open rebellion, declaring their independence and taking up arms to throw out the British, just as the French had been removed a few years earlier. And, who did the colonists turn to for help, especially on the seas where they had no navy, but those same French, who were more than happy to aid the rebels in their battle against France's longtime rival. This latest catalogue from MacManus looks back at those times, where Americans threw out first one European power, and then another.

Rev. Samuel Davies could fairly be described as a "fiery" preacher, and probably a good recruiter for the British/American side during the French and Indian War. Item 14 is The Curse of Cowardice: A Sermon Preached to the Militia of Hanover County, in Virginia, at a General Muster, May 8, 1758. Davies point was that while God normally wants peace, there are times when "war becomes a part of our religion." Perhaps he was something of an American Jihadist. Davies takes aim at those who take up arms, but deceitfully, that is, they live the good life of a soldier, but don't go and use those arms on the enemy. "Need I inform you what barbarities and depredations a mongrel race of Indian savages and French Papists have perpetrated upon our frontiers?" Davies asks rhetorically. In case his point is not clearly understood, he goes on, speaking of those living on the frontier, "Some lie dead, mangled with savage wounds, consumed to ashes with outrageous flames, or torn and devoured by the beasts of the wilderness, while their bones lie whitening in the sun... Others have been dragged away captives and made the slaves of imperious and cruel savages." Other than that, everything was fine on the frontier. Priced at $3,500.

Emma Coleman wrote of some of those poor souls dragged away as captives in 1925: New England Captives Carried to Canada Between 1677 and 1760 During the French and Indian Wars. Despite the title, this isn't a story of Canadian Captivities or savage Canadians. It's really more about Indian Captivities, though undoubtedly with some help from the French Papists. Item 10. $400.

How quickly things change. Item 338 is Letters from a Farmer in Pennsylvania, to the Inhabitants of the British Colonies, written by John Dickinson. This is a third edition from 1769 of this popular work, published a year after the first edition. The Stamp Act of 1765 had already incensed the colonists, and continued legislation designed to raise money without representation further upset the Americans. In his Letters, Dickinson makes a case against the British, but alludes to something even more dramatic than most American patriots would have considered at this time. Dickinson was denying Parliament's right to pass laws over the colonies, or, to put it another way, the colonists had the right to rule themselves, an early argument for independence. $2,500.

Item 199 is a broadside announcing the British victory at Bunker Hill early in the Revolution. In June of 1775, colonial forces set up positions in the hills around Boston. The British went on attack. Twice they attacked American forces near Bunker Hill and were thrown back. Finally, on the third attempt, with the Americans running low on ammunition, the colonists were forced to retreat. It was an official British "victory," but one no better than losing. The British lost a large number of forces, including many of their military leaders. American losses were lighter. Despite the technical loss, the Battle of Bunker Hill instilled confidence in the Americans that they could defeat the better equipped and trained British Army. This "loss" proved a tactical victory for the Americans. This broadside, from the loyalist printer John Howe, proclaims, Boston, 26th of June, 1775. This Town was alarmed on the 17th Instant at break of Day, by a Firing from the Lively Ship of War; and a Report was immediately spread that the Rebels had broke Ground, and were raising a Battery on the Heights of the Peninsula of Charles-town, against the Town of Boston... Howe attempts to minimize British casualties compared to those of the Americans as he attempts to reassure loyalists that everything is all right. $25,000.

Item 414 is A Letter to the Right Honourable Lord Viscount H-E, on His Naval Conduct in the American War, published by Joseph Galloway in 1779. Galloway didn't really think Admiral Viscount Richard Howe was quite so right and honourable. Galloway had been a Speaker of the Pennsylvania House and member of the Continental Congress, but he was a rabid loyalist. Here he attacks the Admiral's conduct even as the war was taking place. It was just a beginning of the various pamphlet wars that would continue after the Revolution ended, various British military leaders proving to be more adept at fighting amongst themselves to lay blame than they were at fighting the American colonists. $900.