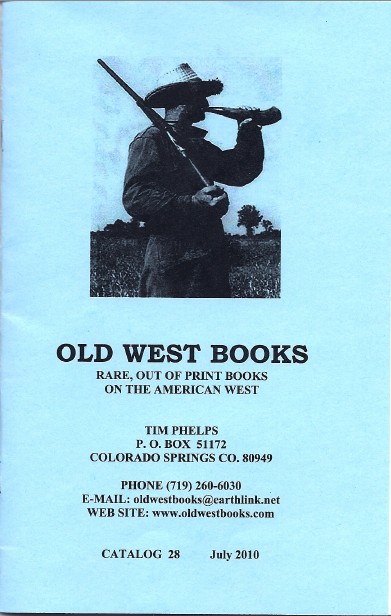 The latest tales from the Old West.

Old West Books has just issued their 28th catalogue of Rare, Out of Print Books on the American West. Old West notes that among the topics of this group are Custer, cattle, the fur trade, outlaws, and Indian wars. That is more by way of example than limitation, as anything about the Old West may be found. If it happened across the Mississippi during the 19th, maybe early 20th century, it is fair game for an Old West catalogue. Here are a few from this time around.

America's Indians did not have a lot of positive press in the 19th century. Indeed, there are several such books within this catalogue whose titles refer to them as "savages." Once these people were labeled as "savages," it became easy to mistreat them, take their land. In 1879, Helen Hunt Jackson heard an Indian Chief speak of his people's troubles, and she was outraged. Changing government policies toward the natives became the overriding goal of the remainder of her life. She managed to find a few sympathetic newspaper publishers who would print her articles about mistreatment of the Indians. Then, in 1881, she published this book: A Century of Dishonor. It recounts the land confiscation and forced removal of several tribes. Mrs. Jackson sent a copy of it to every member of Congress. It helped a little, but only minimally. America was not yet ready to confront its treatment of the Indians, since the process of removal to free up lands for whites was still ongoing at the time. A couple of years later, she published a novel which became hugely successful, Ramona. It told the story of a half-Indian girl and the prejudices she and her Indian husband faced. Ms. Jackson was most interested in getting across the message of the suffering of California's Indians, though the success of this book was based more on it being a romance than a social narrative. Ms. Jackson had more books planned, including one intended to bring her message to children, but she died in 1885 before she could write any more. Item 26. $750.

Item 88 is a biography of a man, oddly enough by the person who killed him. Sheriff Pat Garrett shot an apparently unarmed Billy the Kid off guard in a dark bedroom. The Kid was not much known outside of New Mexico at the time, though he probably did kill half a dozen to a dozen men along the way. However, it was Garrett who made Billy a sensation, though his aim was not so much to promote the outlaw. It was to promote himself, and Garrett had to aggrandize The Kid's reputation so that he could be seen as a great hero for killing him. Garrett had the book published in 1882, and that was the only edition printed during his lifetime. Item 88 is a copy of the second edition of The Authentic Life of Billy the Kid, the Noted Desperado, not published until 1927. This edition was edited by Maurice Fulton, who attempted to make it a bit more authentic than Garrett's original version. $375.

Item 23 is a very rare Custer related item, a "correction" as it were to his famous Life on the Plains. This book is entitled Some Corrections of Life on the Plains, by General William B. Hazen. Hazen had served honorably during the Civil War, and then headed out west, where he was serving as an Indian Agent at the time of the Battle of the Washita (or, perhaps more accurately, the massacre). General George Armstrong Custer had overwhelmed an Indian village, and wished to continue with wiping out the Kiowa Indians, whom Custer claimed were among those combating the U.S. military. Hazen had prevented this action, saying the Kiowas were not hostile. Custer had attacked Hazen in his book, and this very rare pamphlet was Hazen's reply. $8,500.

Item 45 is Daniel Blue's Thrilling Narratives of the Adventures, Sufferings and Starvation of Pike's Peak Gold Seekers on the Plains of the West in the Winter and Spring of 1859. Old West informs us, "Blue's narrative is perhaps more horrifying to the modern reader than thrilling." This is a 1987 reprint of the unobtainable 1860 first edition, of which only three copies are known. Blue and his two brothers set out from Illinois with a small group in hopes of reaching the gold fields of Pike's Peak. They traveled with another group for a while, but after a dispute they separated. Blue's party became hopelessly lost. It was winter, they lost their only horse, weather was terrible, and finally, provisions ran out. Daniel was forced to resort to the ultimate horror as his brothers died. He had to eat their bodies to survive, though noting it had been with their consent and insistence. He was found in a state of dementia by an Arapahoe Indian and saved, to return home, never to wander again. $20.

Speaking of cannibalism, item 100 is The Expedition of the Donner Party and Its Tragic Fate. The author is Eliza Houghton, the daughter of George and Tamsen Donner. She was their youngest daughter, just four years old at the time of the tragic journey that took the lives of her parents in 1847. Eliza was rescued and went on to write this book many years later (published in 1911), and lived until 1922. In this book, she tells of her family's life before the journey, the tragedy of that trip and her rescue, and then about her life later on and the impact of the Gold Rush on California. $300.