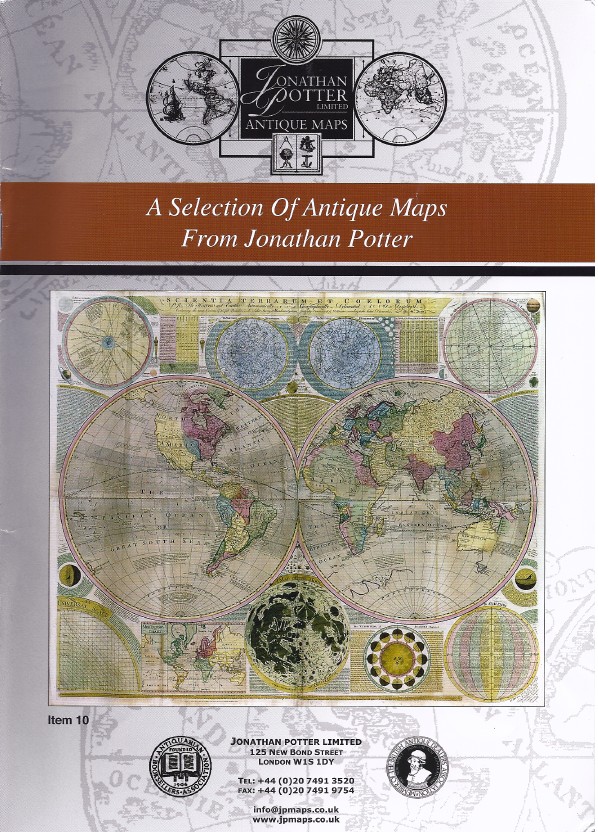 For the summer of 2010, London map seller Jonathan Potter Ltd., has issued the very appropriately titled catalogue A Selection of Antique Maps from Jonathan Potter. This is a collection both wide and deep. It includes maps from all over the world, or of the whole world, along with various related and ephemeral items, such as globes, catalogues of maps, and even a game. There is no shortage of material to choose from, there being 500 items included.

We will start at the beginning, both for maps and for this catalogue. Item 1 is a map of the world from Hartmann Schedel's famed Nuremberg Chronicle. This is sort of a last look at the world as it had been known for a couple of millennia. It is the classical trapezoidal Ptolemaic look at the globe. It was published in 1493, the year Columbus first returned with news of the New World. However, in this map, there is still no New World, no America. Europe is recognizable, central Asia and northern Africa reasonably accurate. Southern Africa is strange, western Asia, like the Americas, nonexistent, and the Indian Ocean is sealed in by a bordering landmass that runs from southern Africa to western Asia. All of this would be making some vast changes, and soon, as Columbus and other explorers told of the lands they found. Priced at £14,000 (British pounds, or roughly $21,340 in U.S. currency).

A century later, in 1588, Sebastian Petri was publishing a later edition of Sebastian Munster's Cosmographia, which contained this map of the world. Now all of the major landmasses save for Australia are depicted in their entirety. Still, North America is a very wide continent, as big as Asia, while South America is an amorphously shaped blob. Added is a vast southern continent taking up almost a quarter of the globe. One look at this huge imaginary land helps us to understand why Captain Cook's discovery two centuries later, that there was no vast southern continent, was such a major finding. Item 3. £4,000 (US $6,097).

Here is a world map that is surprising by western eyes, we being so used to seeing the world from our own vantage point. It is the Chikyu Bankoku Hozu (Japanese World Map). At the center of this map is not Europe or America, but Japan, small though it is. It was published in 1853, just as Commodore Perry was forcing Japan to open its doors to the world. While the outlines of the continents are reasonably accurate, the Japanese weren't quite up on political geography, missing the fact that the British had ceded Oregon to America seven years earlier. £3,200 (US $4,880).