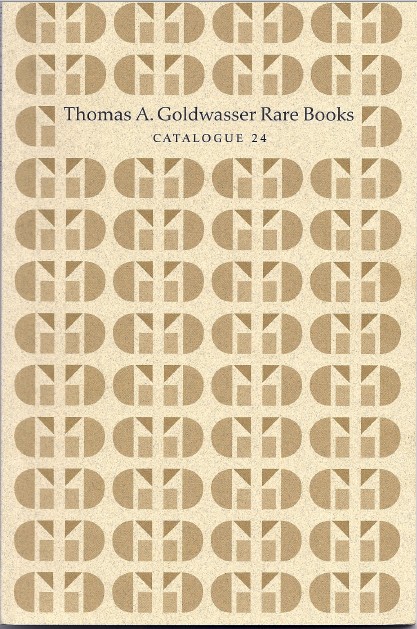 Thomas A. Goldwasser Rare Books recently issued their Catalogue 24. Offered is a collection of various types of material. There is much in the way of literature, fine books, and manuscript letters, along with some history and other types of works. It is hard to summarize, so we will just dig in and describe a few samples.

Item 140 is a copy of what may be the most collectible literary work of the 20th century, a first edition of James Joyce's Ulysses. The work had originally been published in serial form, but the controversy around it discouraged anyone from printing it in book form. Finally, Sylvia Beach took the risk with her Paris based Shakespeare and Company, censors in France being a bit more liberal than those in England. Offered is number 731 of the 750 copies printed on handmade paper (out of a total run of 1,000) published in 1922. Also bound in is a copy of the prospectus, with the words "will be published in the Autumn of 1921" crossed out, and written, in Sylvia Beach's hand, "is ready now." Priced at $35,000.

Speaking of Shakespeare, the other one, item 133 is William Henry Ireland's Miscellaneous paper and legal instruments under the hand and seal of William Shakespeare including the tragedy of King Lear, and a small fragment of Hamlet, from the original mss in the possession of Samuel Ireland of Norfolk Street. Samuel Ireland was an enthusiastic Shakespeare collector, too enthusiastic for his family's own good. His son, William Henry, fed his father's passion by "discovering" obscure Shakespeare items. His success at creating these forgeries emboldened him further. By 1796, when this book was published, William Henry had managed to "find" a fragment of the original manuscript of Hamlet, or so he claimed. His father was exceedingly pleased; others became suspicious. William Ireland was not deterred. He would go on to find a previously unknown Shakespeare play, which was put on in London (the show ran for only a day. The play was evidently not up to Shakespeare's other works). Finally, in 1805, the evidence of fraud now overwhelming, William confessed to his forgeries to save his father from accusations (it is unknown whether Samuel was knowing or fooled to the end). $600.

Item 197 is a bit of unexpected kindness from a man not known for being particularly pleasant, novelist John O'Hara. With personal disappointments and a desire for social standing affecting his thoughts, O'Hara married Helen Petit, farther up the social ladder than he, in 1931. It was a stormy marriage, thanks in much to O'Hara's drinking and irascibility. It ended in 1933. Therefore, it is somewhat surprising to find his 1935 novel, Butterfield 8, with an October 9, 1935 (eight days before publication) inscription "To my darling Pet with love John." $12,500.

Item 77 is a copy of the last book printed by Edward Bosqui, considered the first fine printer of California. Born in Montreal, Bosqui arrived in San Francisco in 1850 as a young man. Rather than prospecting for gold, he got a job in a bank, and in 1867 opened his press. This last work, Alice Eastwood's A Handbook of the Trees of California, printed for the California Academy of Sciences, was issued in 1905. The following year, the plates, most copies of this book, and Bosqui's entire business were destroyed in the fire that accompanied the San Francisco Earthquake of 1906. Only a few copies, mailed early on, of this book survived. Bosqui never rebuilt his business (he was 73 at the time). $3,000.

No one alive ever saw any of his performances, or the shows he put on, yet few are unfamiliar with the greatest showman of his time, P.T. Barnum. Whether displaying freak shows, or the great singer, Jenny Lind, Barnum had the pulse of the public, understanding exactly what they would pay to see. Item 17 is his 1882 revised edition of Struggles and Triumphs; or Forty Years Recollections. Barnum, as always, is entertaining. This copy is inscribed by the author. $650.

You will find many of Thomas A. Goldwasser's books listed in "Books For Sale" on this site. Click here.