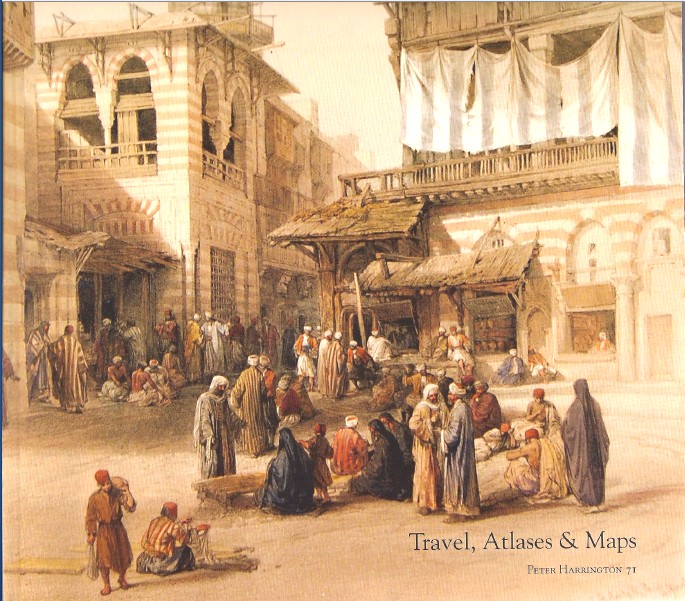 Peter Harrington has issued their 71st catalogue, Travel, Atlases and Maps. Offered are almost 200 items of mostly antiquarian looks at the world as seen through the eyes of Europeans when so much was still new or unknown. From Asia to America, the Near and Far East, Africa to Australia, North to South Pole, and all ports in between, you will likely find them described in the works in this catalogue. Not all of these travels had happy endings, and not all of these maps were terribly accurate, but you won't lack for excitement from any of the items here offered.

Item 10 is a thorough look at America 50 years after the Pilgrims landed: America; being the latest and most Accurate Description of the New World...by John Ogilby, published in 1671. Ogilby may have credited himself with writing this text, but it actually was stolen from Dutch author Arnoldus Montanus' De Nieuwe en Onbekended Weereld. Sabin listed Montanus as the author, describing the work as "an impudent plagarism," while Howes, noting "Ogilby unblushingly claims authorship and never mentions Montanus," states, "Piracy at this period was not confined to the high seas." Nevertheless, this is in effect a translation of a very good description of America at the time, from Canada to Brazil, and includes numerous portraits of great explorers and natives, along with maps and other illustrations of American lands. Priced at £50,000 (British pounds, or roughly $75,326 in U.S. Currency).

Item 57 is a Wild West story, Last of the Great Scouts. The Life Story of Col. William F. Cody "Buffalo Bill". Perhaps this is not an objective account since its title continues As Told by His Sister. This book may have been ghostwritten by Bert Leston Taylor, but Helen Cody Wetmore certainly provided the material, and her brother was a cooperative subject. It is an exciting tale about the life of the great showman, and his upbringing on the frontier, and notably, bloody Kansas where his abolitionist father died from injuries inflicted by pro-slavery border ruffians. This 1899 first edition is inscribed by "the sister of W.F. Cody "Buffalo Bill." £4,250 (US $6,401).

Item 116 consists of six publications relating to the Suez Canal, bound together. Most notably is Question du Suez Canal, by Ferdinand de Lesseps, published in 1860. De Lesseps had befriended the future ruler of Egypt years earlier as a diplomat, so he managed to get the concession to build the canal. Despite bickering between the French and British, he was able to raise the necessary funds and construct a canal many thought could not be built. It was opened in 1869, and de Lesseps later tried to build a canal in Panama, but this attempt was not successful. A couple of the items were signed by de Lesseps. £3,500 (US $5,272).

Item 15 is a first edition set of travels by a man whose name is familiar to us as a couple of cities and an island as well as an explorer, George Vancouver. Vancouver had already participated in Cook's second and third voyages when he was chosen to lead his own expedition to the northwest coast of America. Like so many before and after, part of his mission was to attempt to find a northwest passage, along with other explorations. However, his presence was also intended to assert British claims to this territory, one of the last areas on Earth still mostly unexplored at this late date (1790s). Despite his great achievements, and his very well-run operation, Vancouver did not receive the recognition of many other explorers due to some disruptive but well-connected crewmen. His three-volume plus an atlas account, published in 1798 (after his death), is entitled A Voyage of Discovery to the North Pacific Ocean, and Round the World... €47,500 (US $58,748).

George Anson's 'round the world voyage was nowhere near as professionally run or as successful as that of Vancouver, and yet Anson received far more recognition and personal rewards than did the latter. Item 18 is Anson's A Voyage Round the World in the Years MDCCXL...IV... published in 1748. Anson was sent to harass Spanish shipping around South America in the infamous War of Jenkins' Ear. He lost all but one of his ships, most of his crew died from disease and accidents, and many of those who did survive went through harrowing tales of finding their way to civilization in South America, which, of course, was controlled by their Spanish enemy. Despite repeated failures in his mission, Anson's one ship managed to make it around the Horn and headed back home going east to west. Miraculously, he managed to find and capture a Spanish ship laden with treasure off the coast of the Philippines, which enabled Anson to return home a hero and wealthy man despite losing most of his ships and men. €3,850 (US $4,761).