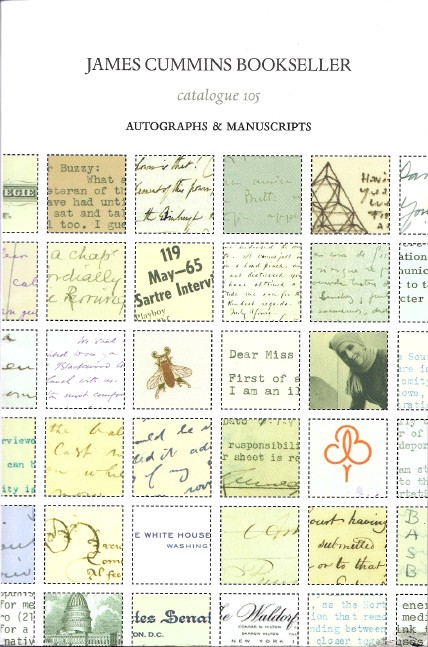 James Cummins Bookseller has issued a catalogue that is not a catalogue of books at all. Its title is Autographs and Manuscripts, featuring, naturally, the written (occasionally typewritten) word, not the printed one. That is not to say there aren't many writers, along with other leading figures represented here. However, what we get are more likely glimpses into their personal lives, in the form of letters and other one-of-a-kind documents. Here is where you may learn something about the famous person not as visible through their public writings and speeches. This is a look behind the scenes.

Item 114 is a remarkable letter from a young soldier in 1861 to his sister back home. The 18-year-old soldier was William McKinley, who three and one-half decades later would be elected President of the United States. In 1861, McKinley was stationed in Virginia, fighting for the Union Army. In response to the question whether Union soldiers were becoming tired of fighting and were anxious to return home, McKinley responds that he felt his services were needed when he first left home, and now they are needed even more. "...[C]onsequently I have no desire to return to my civil occupation, when my country is bleeding from a 'thrust' made by inborn Traitors. Much as I love home and its blessed associations, my native country, the Government that gave me birth, freedom and education, shall not be destroyed, if my services can assist to prevent it." Priced at $9,000.

Item 93 is an odd document from another brave soldier (or sailor) who served in another war, and also later became President. The typed statement reads, "I hereby assume all responsibility of mattress when rubber sheet is removed from my bed." It is signed "John F. Kennedy, Lt. USN," and dated July 1, 1944. The explanation for this bizarre document is that Kennedy was recuperating from injuries in Boston at the time, and was about to undergo back surgery at New England Baptist Hospital. The hospital had a policy that if you wanted the rubber undersheet removed from your bed (and evidently it did not add to a patient's comfort), you had to take responsibility for any damage that might result to the mattress. Fortunately, the Kennedy family was quite wealthy, so the future President was able to take this gamble for comfort's sake. $5,000.

Item 5 is a letter from the one and only P.T. Barnum to James Gordon Bennett, publisher of the New York Herald. Barnum, of course, was the master showman, and at the time he was promoting the American tour of "The Swedish Nightingale," songstress Jenny Lind. The year was 1850, and the Herald apparently had some not so nice comments about Lind and Barnum. The showman didn't mind. He long ago realized that negative publicity simply brought in more paying customers. Barnum writes Bennett that he is not the least offended or annoyed, noting, "I am too old a soldier to flinch much at paper bullets." $3,500.

Item 41 is an interesting letter from the great western writer and cattleman J. Frank Dobie to a young reader. Dobie laments that television, movies, and Western books have overemphasized violence, rather than the decency and loyalty of the men who worked the herds. He writes, "The old trail driver who claimed that his life had been saved six times by his NOT having a six-shooter represented open range days better than any Billy the Kid." $300.

Item 109 is a letter from an obscure writer, not a famous name. His name was Allan Beattie, and he was 18-years-old when he traveled with his mother on the RMS Lusitania. The Lusitania was the British passenger ship torpedoed by the Germans in 1915, during World War I. Almost 1,200 of the slightly under 2,000 persons on board died. It led to international outrage against the Germans, playing a role in America's eventual entry into the war. Beattie writes of the initial confusion, of his giving the first life jacket he found to another, only to have to retreat below to find the lifejacket in his room. This one he gave away too, to his mother, who observed, "I am not nervous I don't think there is much danger do you?" Beattie says he thought it looked "about as bad as it could," and forced his mother to put on the lifejacket. Shortly thereafter, the boat went down, and his mother was lost. He slid down the entire length of the deck and was flung free, being one of the fortunate ones to be picked up by a lifeboat shortly thereafter. This 12-page letter by the survivor from Winnipeg was written shortly after the sinking. $15,000.