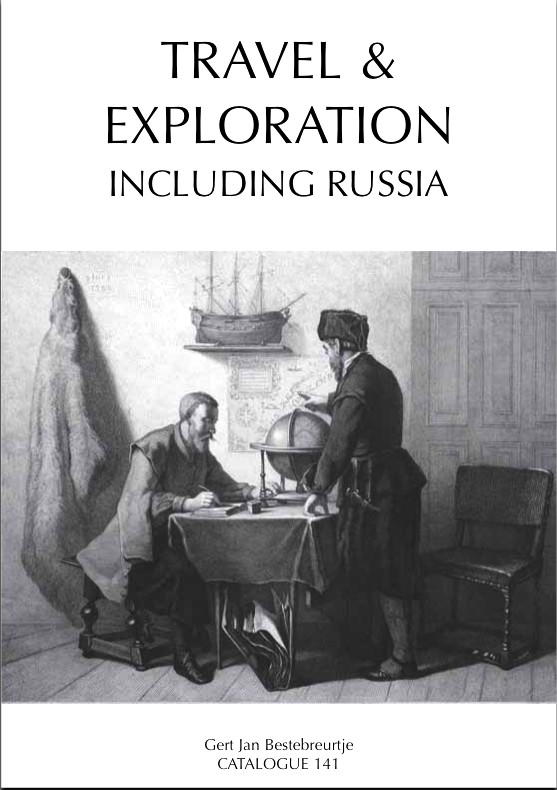 The latest catalogue from Gert Jan Bestebreurtje Rare Books is entitled Travel & Exploration Including Russia. Actually, it includes a lot more than just Russia. Those living in North America will find a surprising number of books relating to their homeland from this Dutch bookseller. Other books cover journeys to Asia, Africa and South America. Travels of just about any sort can be found in this catalogue. Here are a few samples, with the caveat that we have focused on American material as this writer is far more comfortable describing material written in English than in Dutch.

Item 11 is one of the first comprehensive looks at the American Southwest after the Mexican cession: The Silver Country; or, The Great Southwest. A Review of the Mineral and Other Wealth, the Attractions and Material Development of the Former Kingdom of New Spain... by Alexander Anderson, published in 1877. Anderson focused on silver and mining in the states of Arizona, New Mexico, California, Colorado and Utah, either captured during the Mexican War or obtained as a result of the Gadsden Purchase, though it includes other material such as a description of cattle in Texas. Priced at €175 (euros, or approximately $213 in U.S. dollars).

Next we have a couple of old books about America's Indians, though these titles are not without their critics. Item 47 is The Indian Races of North and South America; comprising An Account of the principal Aboriginal Races... by Charles de Wolf Brownell, published in 1853. It describes numerous tribes, their chiefs, customs, etc., and relations with European settlers. The title states the illustrations "executed in the best style of the art, by the first artists in America." However, Thomas Field, in his 1873 Indian bibliography, counters, "The last half of the title-page must have been written by the publisher, and the illustrations drawn by his infant son, as the Preface and Text indicate too respectable a mind to have concocted such a farrago, involving at least half a dozen falsehoods regarding the plates, which are the most tawdry and offensive daubs." €350 (US $427).

Next we look at the Indian work of William V. Moore (real name John Frost): Indian Wars of the United States, from the Discovery to the Present Time... published circa 1850. For this one, we go to Joseph Sabin's bibliography for the appropriate quote: "This is the first work of its prolific author, if such a term can be applied to a notorious pilferer." Item 235. €225 (US $274).

Robert Ker Porter was an artist, writer, traveler, diplomat and even an accomplished horseman. He was also evidently a very likable fellow, being popular with his associates wherever he traveled. In 1805, he traveled to Russia to serve as an artist for the Czar, his adventures being the source for his book Travelling sketches in Russia and Sweden during the years 1805...1808. While there, he won the heart of a princess. He returned in 1812 to marry his princess. Along the way, he was knighted in Russia and Sweden, and welcomed into an order by a Persian monarch. As well as writing about Russia, he wrote books about Sweden, Spain and Persia, and served as British consul to Venezuela. Item 264 is an 1813 second edition of this book. €2,250 (US $2,755).

Here is a book that suddenly sounds timely, though not for positive reasons. It's the 1943 book The Bayous of Louisiana, inscribed by the author, Harnett Kane. I won't say those were simpler times, as the book was published during the middle of the Second World War, but at least they didn't have to worry about oil in the bayous back then. Item 171. €35 (US $42).

Item 202 is an unusual piece of Americana: Reis door de Vereenigde Staten van Noord-Amerika in de jaren 1824 en 1825, door den Generaal Lafayette. This is the rare Dutch translation of Frenchman Auguste Levasseur's account of General Lafayette's return to America almost half a century after the Revolution. Lafayette, the young French officer who came to America and did so much to help that nation's revolution, soon returned to his native France. He was imprisoned and almost executed during France's revolution, but years later, returned to local politics to become a legislator and strong voice for democratic reforms. In 1824, after his long absence, Lafayette returned to America for a sort of farewell tour. He visited all of the then 24 states, where he was constantly received by huge, adoring crowds, along with virtually all of America's important leaders. That a Dutch language edition of Lafayette's private secretary's account of the Frenchman's visit to America was printed is something of a surprise, but here it is. €450 (US $550).