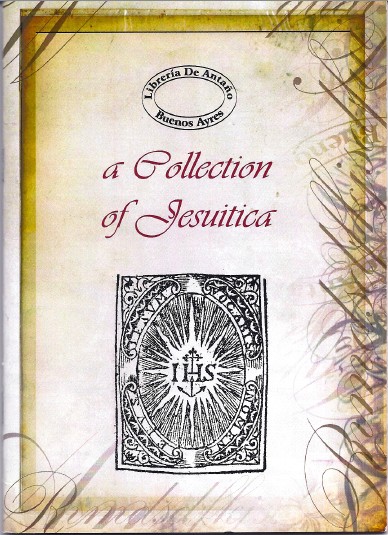 A Collection of Jesuitica from Libreria de Antano.

Libreria de Antano is offering A Collection of Jesuitica. Libreria de Antano is located in Argentina, and much of the early development and exploration of South and Central America was conducted by the Jesuits. Of course, their primary purpose in coming to the New World was to serve as missionaries, to bring the Gospel to the natives of the land. Nevertheless, their mission encompassed much more in terms of education, health, and other services. Their deep involvement eventually became perceived as competition for authority by the Spanish government, in time leading to their expulsion from all of the Spanish world. Still, their role rivals that of Spain in historical importance, and much of what we know about the Americas in their earliest days after European discovery and colonization comes from the writings the Jesuits left behind.

Item 3 is one of only four items printed on the Jesuit press at the Indian mission of Juli, operated from 1610-1613: Libro de la vida y milagros de Nuestro Senor Iesu Christo en dos Lengues, Aymara, y Romance... by Ludovico Bertonio. Father Bertonio left Italy just short of his 30th birthday as a missionary to Peru, and remained there the rest of his life. He worked with the Aymara Indians, producing four printed volumes over his lifetime, including this translation of a religious text into the Indian language, published in 1612. This book provides a valuable look at the Aymara language because of the bulk of material that was translated into the dialect. It is a very rare item, exceedingly so in a complete copy such as this. Price on request.

Item 1 consists of a group of even earlier manuscripts relating to the death and estate of Luis de Medina, a member of the secular clergy (as opposed to a member of a particular order). However, the Jesuits are named in his will, as he left some of his worldly goods (it does not appear Medina had taken a vow of poverty) to the Jesuits. Among the items the Jesuits received was Father Medina's slave, Domingo. The priest died in 1578, and these documents were executed during that year and the following one. They cover various bequests to missions, hospitals, a brother and some nieces. Father Medina also paid off all of his debts. Along with the slave, the Jesuits were given a saddle for a mule, a useful item in the day. $1,750.

The Jesuits came to be a major political force, both in the Americas and Europe. By the early 1760s, they had already been expelled by the French and Portuguese. However, they seemed to remain in good standing in Spain until 1767, when King Carlos III, perhaps fearing their power, delivered a preemptive strike. They were expelled from Spain and all Spanish possessions, which, naturally, included America, where they had been so active in missioning to the native population. The Jesuits were accused of mistreating and profiting off of the Indians, and while that was undoubtedly to some extent true, it was unlikely the King's real reason for his action. Whatever it was, he refused to divulge the particulars for which he expelled the Society. Item 17 is Pragmatica sancion de Su Magestad en fuerza de ley para el estranamiento de estos Reynos a los Regulares de la Compania. This is a 1767 first edition of King Carlos III's decree expelling the Jesuits from Spain and its territories, while confiscating the Order's property, which was quite considerable and valuable. $7,500.

King Carlos may not have liked the Jesuits, but he certainly appreciated the book Incommoda probabilisimi by Vicente Mas de Casaballs. In this 1778 proclamation, Por quanto por mi Consejo de Castilla tuve por bien de expedir para estos Reynos... the King recommends this book be used by universities in America. The King was pleased with the author's refutation of the idea that it was acceptable to kill a king if he was a tyrant. Carlos III would prove to be safe from such behavior, though his next-door neighbor, Louis XVI of France, would become a victim of this thesis a few years later. Item 22. $1,400.