A Spring Miscellany from Sotheran's 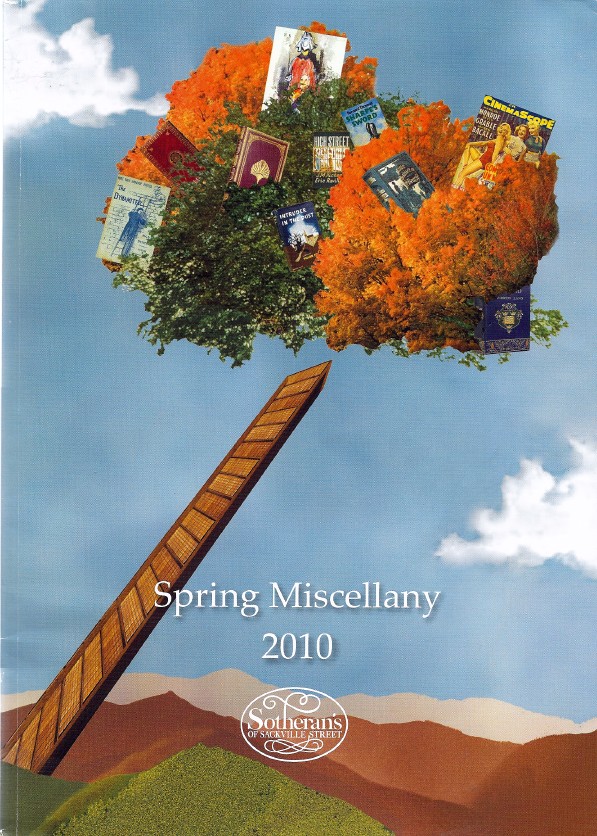 A Spring Miscellany from Sotheran's.

Sotheran's, the two-and-a-half century old bookseller from London, has issued its latest catalogue, Spring Miscellany 2010. A "miscellany," by definition, can contain just about any type of book. A wide variety is what you will find in the 400+ listings in Sotheran's latest collection. They range from comical children's books to serious historical narratives, with some fine press editions along the way. Here are a few samples of the works you will find being offered by this bookseller almost 250 years after Henry Sotheran first set up shop in York.

It was one of the great mysteries and impetuses for adventure for Europeans for centuries. Everyone knew the Nile was one of the world's great rivers, and that it flowed into the Mediterranean. What was unknown was where it began. Finally, in 1856, an expedition headed up by the renown explorer Richard Burton and John Speke set out for Africa to discover the source. Both men became seriously ill, and Burton had to stop, while Speke, half-blind, continued on to Lake Victoria. Speke concluded this was the long-sought source of the Nile. Burton remained unconvinced. It became a source of intense debate between the two, but Speke led another mission, this time without Burton, and came away even more certain that he was right the first time (he was). He published his findings in 1863, and then followed up in 1864 with this book, What Led to the Discovery of the Source of the Nile. Speke shot himself (uncertain whether intentionally or accidentally) that same year, shortly before a scheduled debate with Burton. Item 386. Priced at £2,500 (British pounds, or roughly $3,617 in U.S. dollars).

Item 258 is a complete run of what some consider the most important literary magazine of the 1940s: The Penguin New Writing. Editor John Lehmann secured the assistance of Penguin Books to publish his literary magazine in 1940. The outbreak of war made it difficult to obtain paper. The magazine was published until 1950, 40 volumes in all. It introduced many new writers and published works too controversial for other magazines at the time. Among the writers who contributed were George Orwell, Graham Greene, Frank O'Connor, and Dylan Thomas. £398 (US $576).

Item 88 is the story of another adventurous man, El Jimmy. Outlaw of Patagonia, by Herbert Childs, published in 1936. James "El Jimmy" Radburne was British born, but spent most of his life in the backwoods of southern South America, an area of one of the world's last frontiers. He worked on various ranches, found himself in trouble with the law, and joined up with local Indians. Eventually, he ran off with an Indian woman and settled on his own ranch. £148 (US $214).

Item 353 is a look at the American West in the days shortly before the transcontinental railroad opened the land to easy access: Beyond the Mississippi: from the Great River to the Great Ocean, published in 1867. Author Albert Deane Richardson was a newspaperman who traveled through much of the West and wrote about his adventures for the folks back East. This was a very popular book in its time. Richardson would lead a tragic life, at least during his last few years. Captured as a Union spy, he was locked up in a Confederate prison while his wife and daughter died. He escaped, and a few years later became friendly with an actress who was married to an alcoholic, abusive husband. The husband shot Richardson, but he survived, only to be shot by him again two years later. This time he was not so lucky, though he lived long enough to marry his just-divorced sweetheart. £395 (US $571).