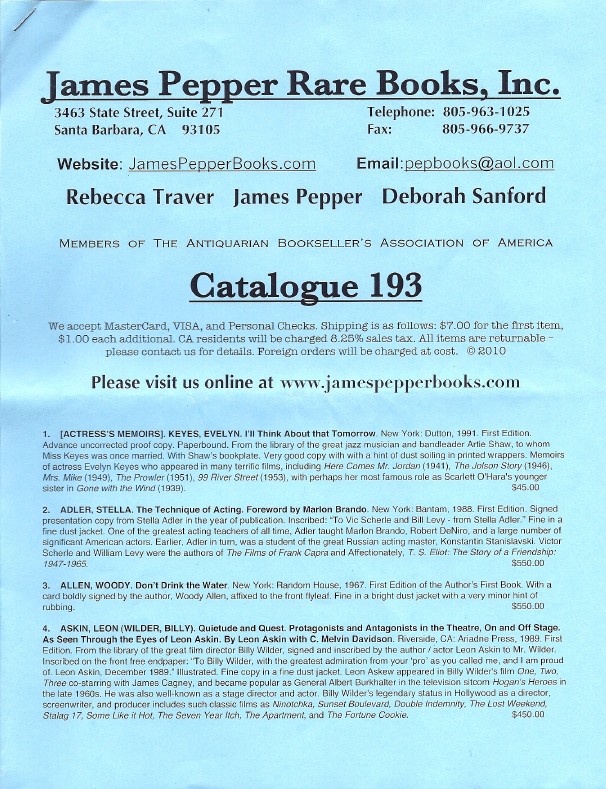 James Pepper Rare Books has just come out with their Catalogue 193. Pepper's catalogues are issued almost monthly, and the type of material offered - literature, film related, and mystery - is a constant. Only the titles change. Here are a few selections from this latest catalogue.

Item 80 is an obscure and sometimes overlooked item for Sinclair Lewis collections. The reason it can be overlooked is the author was Albert Payson Terhune, not Lewis. It is a Civil War novel entitled Dad, published in 1914. Terhune was a journalist and prolific writer, and later would become best known for dog books and being a breeder of collies. However, despite his ability to write many books, he was running behind deadline with this one, so he called on Sinclair Lewis to help him out with a few chapters. Lewis wrote chapters 21-23. If you are wondering how a lesser-known writer such as Terhune was able to secure the assistance of a giant like Lewis, in 1914, Terhune was the better known writer. Lewis had just published his second book that year, and would not have significant commercial success until 1920. In 1914, he was helping other writers on the side to earn enough money to get by. Priced at $5,000.

Item 81 is another unattributed Lewis book, Tennis As I Play It, by Maurice E. McLoughlin, published in 1915. McLoughlin, the "California Comet," was the top-rated tennis player of 1914, known for his hard serves and aggressive style of play. However, he was evidently not a great writer, so Lewis was called in to ghostwrite his story. This book is not as pricey as the Terhune volume as, because it carried McLoughlin's name, it was a better seller, resulting in more copies being printed. $450.

Next we have an artist's book from one of today's notable bibliophiles. Yoko Ono was the talk of the recent ABAA Book Fair in New York, her presence probably the most discussed occurrence at the show. Of course, she is known to millions if not billions of people worldwide as the wife of John Lennon, the famed musician and member of the Beatles. Perhaps we will never be able to evaluate her art on its own right because of the enormous fame she received by being John Lennon's wife. Item 99 is Pennyviews, a fine press book of her artwork printed on two types of Japanese paper in 1995. It is a limited edition signed work, just 125 copies being produced. $650.

You generally don't need to know French to read Orson Welles, but every rule has its exception. Item 133 is Une Grosse Legume, literally "a big vegetable," colloquially a "big shot." It is the story of a small country in the midst of competition between communists and capitalists, and Coke and Pepsi. I can't tell you much more as my French is not good enough to understand a book very well, and this one was never published in English. It was to be a screenplay, but the project was shelved. However, Maurice Bessy translated Welles' work into French and it was published in Paris in 1953. This copy is warmly inscribed by Welles to legendary New York Post theater and gossip columnist Leonard Lyons. $3,000.

So what ever happened to Donald Duck, Goofy and Pluto, those icons of your youth? Well, the inevitable - they got old. Item 36 is an ink and pencil drawing by Disney animation artist Jack Kinney, from 1988. The illustration was created for Kenney's book Walt Disney and Other Characters, but never used. In it, Donald Duck is wearing thick glasses and using a walker, Goofy is limping and using a hearing device while saying "Eh," (implying he is either deaf or a Canadian), while a wobbly Pluto, trying to catch his breath, goes "Puff, Puff." $250.