A Miscellany of Unexpected Material from Brian Cassidy, Bookseller 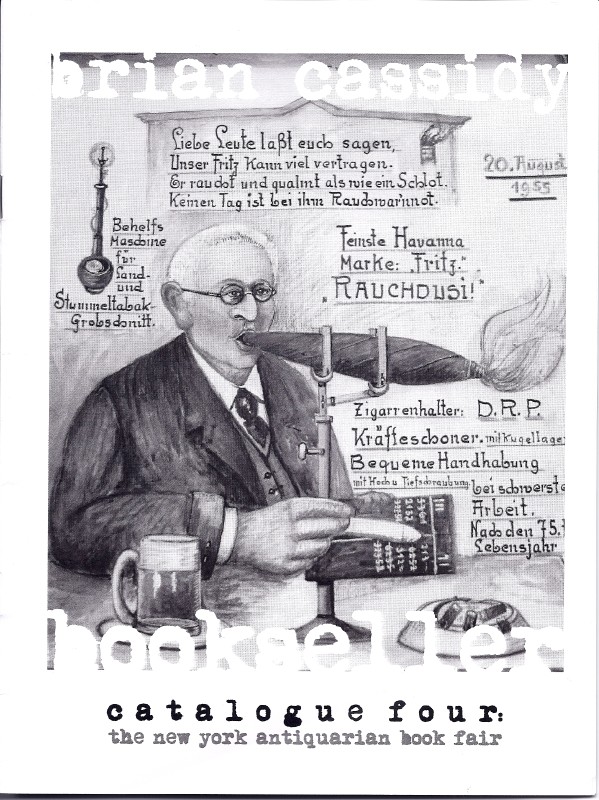 All types of works from Brian Cassidy, Bookseller.

The latest collection from Brian Cassidy, Bookseller, has arrived - Catalogue Four. He describes this as "a bit of a miscellany," which indeed it is. It ranges from classic novels to unusual pieces of ephemera. There are fine books, great literature and poetry, along with material about rock and roll, manuscript and photograph albums, and material that rides the border between art and obscenity, depending on your point of view. Cassidy notes, in a bow to "realism and market forces," that many items have been reduced in price. There is certainly a lot to be found here, much of it surprising and quite interesting. For example...

Here is one of those manuscript and photograph albums, with the title Preliminary Draft of the Remaining Covered Bridges of New Hampshire. This is a spiral notebook of a proposed book, replete with over 300 photographs of covered bridges and their architectural details. It was compiled by D.A. Gregg circa 1938-1940. He has photographs of 63 of the 70 bridges he listed, and postcard pictures of four others. Most bridges have shots taken at various angles, and some include close-up views. Evidently, this book was never published, and now many of these bridges no longer exist. Instead, this has become a wonderful historical archive of iconic New Hampshire bridges. Item 64. Priced at $1,500.

Women have achieved many firsts for which they can be justly proud, but no one would want to claim the first for which Ruth Snyder is known. "Ruthless Ruth" Snyder was the first woman to be executed by electrocution. If unwanted, at least her "first" was deserved. Ruth Snyder was an ordinary but bored housewife with a rather dull, older husband. Then she met Judd Gray, a corset salesman. The attraction was magnetic. They met on the sly for a couple of years before deciding to make the big move. That included bumping off Mrs. Snyder's in-the-way husband. To help provide for an even better future, she took out a $48,000 life insurance policy on her husband, and arranged for Gray to lie in wait at their house while they attended a party. On their return, Gray smashed Mr. Snyder over the head with a weight, but it was not successful. It got messy, but the loving couple managed to garrote Snyder and stuff chloroform up his nose. Gray then tied up Mrs. Snyder to pretend it was a robbery. It didn't work. Police quickly figured out the amateurish crime and the two were placed on trial. It was one of the most sensational trials of the Roaring 20s. Each tried to blame the other, and both were successful. Each was executed. Punishment moved more quickly in those days. Mr. Snyder was killed on March 12, 1927, and exactly 10 months later, Mrs. Snyder met the same fate. The sensationalism of the case was topped off when a Daily News reporter snuck a camera into the execution, strapped to his leg, then lifted his foot and pulled a string to snap a picture just after the electricity shot through Mrs. Snyder. The picture was flashed on the front page of the newspaper under the simple heading, "DEAD!" The case inspired several books and movies, most notably James Cain's Double Indemnity. However, Mrs. Snyder also wrote her own book while waiting on death row, and a copy of it is offered as item 159: Ruth Snyder's Own True Story. Written by Herself in the Death Cell. It was published in 1927. $3,000.

Ruth Snyder may have needed more excitement in her life, but the same cannot be said for Nan Kellam. Nan and her husband Arthur left defense contracting work in California for a small island they purchased off the coast of Maine. There they spent the next 40 years, living without such modern conveniences as telephones and electricity, and with no one to share their island beside themselves. That was enough. In fact, it was exactly what they wanted. When age necessitated they leave, they left their home exactly as it had been, furniture, dishes, etc., unmoved. Arthur died in 1989 and Nan occasionally visited the home during the remaining 13 years of her life. Meanwhile, photographer David Graham took pictures of their home, deserted now of people but still peopled with the unmoved objects of the Kellams' lives. His book of photographs, including an essay about the Kellams by Nicols Fox, is found in Alone Together, published in 2002. Item 19 is signed by Graham. $750.

Item 119 is the first book by Neil Gaiman. He has described this obscurity as his "dark secret." Gaiman achieved great popularity writing comics in the 1990s, and since then his novels, science fiction, and children's books have only increased his popularity and won numerous awards. However, this first work, published in 1984, bears the burden of the title Duran Duran: The First Four Years of the Fab Five. Let's just say the Fab Five were nowhere near the level of the Fab Four. The years have not been as critically kind to this 80s British glamour band as to many of its predecessors, a fate as well deserved as that which struck Mrs. Snyder. One can only assume Gaiman was hungry as a wolf for a paycheck. $1,500.