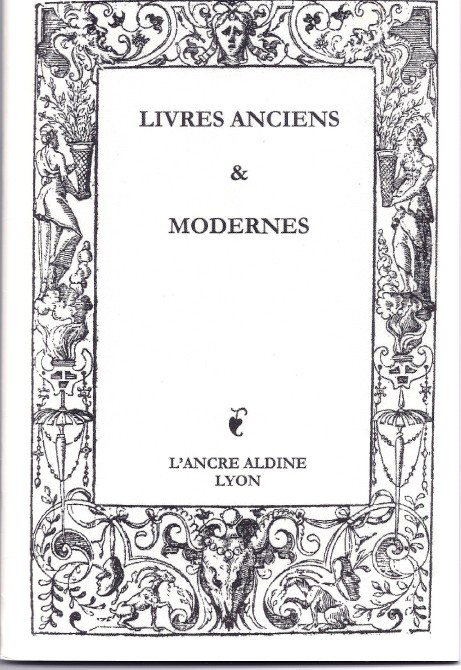 L'Ancre Aldine, the Lyon, France, bookseller, has issued their 16th catalogue. It carries the heading of Livres Anciens & Modernes (Antiquarian and Modern Books) and Cent-Dix Livres Choisis (One Hundred Ten Selected Books). As you might imagine, the catalogue is written in French. This can be said of most of the books offered as well, though not all. Just as there is a wide range of publication dates in a catalogue of antiquarian and modern books, there is a great variety of subjects covered. Here are a few of the books you will find.

Item 71 is a recollection of a very bad time in Lyon, and all of France: Tableau des prisons de Lyon, pour servir a l'Histoire de la Tyrannie de 1792 et 1793, published in 1797. Author Antoine Francois Delandine wrote numerous books on various subjects, and was a minor political figure. He ran afoul of the authorities as the Revolution turned to the Reign of Terror, and Delandine got to observe prison life from the inside. He was lucky to escape the guillotine. In later years, Delandine settled down to become Director of the Library of Lyon, and produced several bibliographic works. Priced at €1,100 (euros, or approximately $1,374 in U.S. currency).

Abbe Francois Timoleon Choisy would probably be classified as a cross-dresser today, though it's doubtful the term was used in the late 17th century. Actually, it was Choisy's mother who encouraged his dressing as a woman, so dressing him until he was 18. As a result, Choisy drifted back and forth in his manner of dress throughout his life. He at one time instructed young women in how to dress, hired by mothers who thought he was a woman. Choisy took advantage of the opportunity, as despite the dress, he was strongly heterosexual. Choisy would likely have lived in obscurity except that his mother was a friend of King Louis XIV, and he grew up around the court. He even participated in a diplomatic mission to Siam, but for the most part, the King had few roles for a man of his unusual appearance. Item 22 is Choisy's book Memoirs pour servir a l'histoire de Louis XIV, a gossipy book published posthumously in 1727 recounting the life and times of the author and the people he knew, including those at the court. €300 (US $375).

Item 69 is a memoir of negotiations between France and England near the close of what was known as the French and Indian War in America (part of a larger conflict known as the Seven Years War in Europe). It is by French officer Etienne-Francois de Choiseul de Stainville: Memoire historique sur la negociation de la France & de l'Agleterre [sic], depuis le 26. Mars 1761. It was these negotiations, resulting from France's military defeat at the hands of the British, that forced them to surrender virtually all of their possessions in North America. Canada was ceded to the British, while France turned over Louisiana to their ally Spain, in compensation for the latter losing Florida. €400 (US $500).