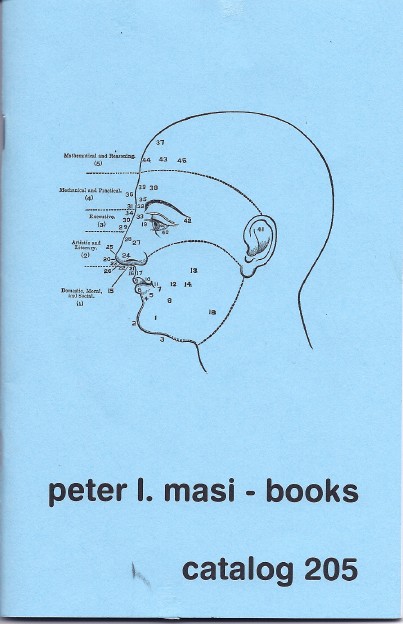 Peter L Masi Books has issued Catalog 205 of almost 500 items on a variety of subjects, the common thread being you won't have to pay much for all but a handful of titles. The catalogue is dominated by $10 and $20 books. Many come from the collection of Marjorie Lemay, who was a Harvard Medical School neuroradiologist who died in 2008. Her collection included many medical works, and her special interests focused on the skull and brain, which in turn led to interests in anthropology, archeology and paleontology, and from there to the art and culture of people of different lands. She was at one time married to Walter Eugene Knox III, a cancer research biochemist, so some of these books were once his, including a number of student Ph.D theses. Masi notes that Lemay did not obtain these books so much for a collection as for the information within, so they may not be considered the most highly collectible of titles yet, but they are priced accordingly. Here are some of the books you will find in the latest group of books from Peter L. Masi.

Medical texts may sound a bit dry for most readers, but fake medicine is always fascinating. Item 304 is Gerald Carson's One for a Man, Two for a Horse: A Pictorial History, Grave & Comic, of Patent Medicines, published in 1961. This look at medicine from a century ago includes many pictures and advertisements for the wonder drugs of another era. Of course, readers may have laughed at the absurdity of the claims back in 1961 even as they purchased Geritol in copious amounts for their "tired blood," its primary ingredient being the same as many of these earlier medications - alcohol. Today, we are more reasonable, rushing to our doctors for a prescription to the latest drug with an invented name as seen on TV. Priced at $10.

From fake medicine we go to fraudulent paleontology: Piltdown: A Scientific Forgery, by Frank Spencer, published in 1990. Piltdown man was a "human" fossil discovered near Piltdown, England, by Charles Dawson. Its jaw was more ape-like, but its brain was large, like a human. To many, it was the "missing link" between apes and humans, showing that our ancestors developed intelligence prior to developing our current diet. However, it was all a fraud. It took 40 years to finally establish the truth (though many were suspicious long before). Someone, likely Dawson, had combined parts of a human skull with an orangutan's jaw, and then filed down the teeth to create this in-between species. Item 74. $10.

Item 328 is a book that combines medicine and art: Robert C. Hinckley and the Recreation of "The First Operation Under Ether." That operation was conducted on October 16, 1846 at Massachusetts General Hospital, and if there is something worse than being the subject of the first operation under ether, it would be being the subject of the last operation without ether. Hinckley reproduced this momentous event on canvas some three decades after it took place, meaning it should not be considered quite as accurate a portrayal as a photograph. Author Richard Wolfe has managed to dig up every imaginable detail about this painting that now hangs in the Francis A. Countway Library of Medicine. $25.

Albert Schweitzer was one of the great humanitarians of the 20th century. Actually, "humanitarian" understates his beliefs. He developed a philosophy known as "Reverence of Life," but for him, "life" meant all life, not just human. The one sure thing, Schweitzer believed, is that we are alive and want to go on living, and that this applies to all life. So, though he understood we must take some life, even if just plants for eating, he felt we should understand what we are doing and not take life needlessly. These values led Schweitzer to the major activity of his life - operating a hospital in a part of Africa where medical care was practically nonexistent during the first half of the 20th century. His reverence saved countless human lives as well as inspiring the environmental movement that began to grow near the end of his life. Item 35 is A Tribute on the Ninetieth Birthday of Albert Schweitzer, celebrated in Boston on January 14, 1965. The great doctor died later that year. $10.

Item 9 is an item that stirs both sadness and irony: The Democratic Republic of Sudan. From a Great Past...to a Peaceful & Industrious Present. That may have been the present circa 1975, but in the years following, the country has been home to some of the most brutal internal conflicts and genocide seen in the world during the past two decades. $15.