The Southwest and More from Back of Beyond Books 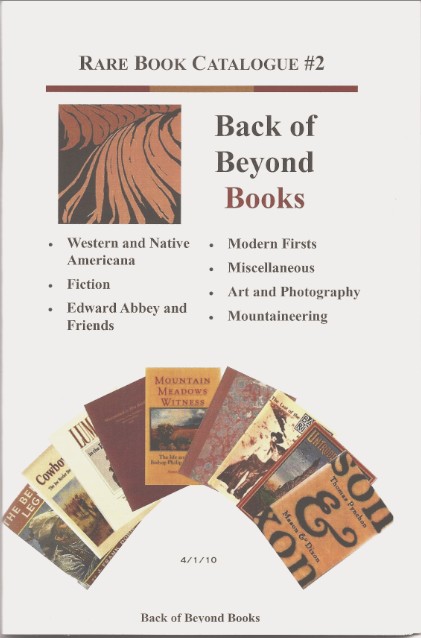 Books primarily from the Southwest from Back of Beyond Books.

Back of Beyond Books has issued their Rare Book Catalogue #2, closely on the heels of #1. That is a tribute to the success of their first catalogue of rare and antiquarian books, after years of focusing on new titles. Back of Beyond features primarily works on their home area, the Desert Southwest, west of the Rocky Mountains. The challenges of heat, extremely dry conditions, and spectacular landscape has made this area a great source for exciting adventures and explorations. Along with its focus on the natural history of the area, the catalogue has sections on fiction, art and photography, and mountaineering. There is also a wide selection of titles from the noted local writer Edward Abbey. Here are some of the books being offered.

Item 20 is the classic resource for map enthusiasts of the West. It is Carl Wheat's Mapping the Transmississippi West 1540-1861. It includes reproductions of over 300 antique maps of the West, five volumes bound in six. It starts with the Spanish era, moves on to the period between the Louisiana Purchase and Fremont's expedition (including Lewis and Clark), and then to the Mexican boundary surveys, railroad surveys, and Civil War to geological surveys. The set was published in an edition of 1,000 copies from 1957-1963. This is the resource for early maps of the American West. Priced at $3,250.

Item 35 is one of the earliest American looks at its western territory: Report of the Exploring Expedition to the Rocky Mountains in the Year 1842, and To Oregon and North California in the Years 1843-44. This is the 1845 senate issue of General John C. Fremont's early look at the west, including pre-Mormon Utah and pre-Gold Rush California. Fremont conducted several expeditions, the two herein described his most successful. His account captured the imagination of many Americans, enough so that in 1856, he became the first nominee for president ever of the new Republican Party (he lost). $3,250.

Item 1 is 50 Years in Death Valley - Memoirs of a Borax Man, published in 1970. It is signed by the author, who is Harry P. Gower, not Ronald Reagan. Reagan was the television voice of Gower's employer, U.S. Borax, promoting "20 Mule Team Borax," a cleanser, as he hosted the television series Death Valley Days in the 1960s. While Reagan knew more about politics, it's safe to say that Gower knew more about borax, and Death Valley, the exceedingly hot and dry place where U.S. Borax extracted the mineral which readily dissolves in water to create a detergent. $50.

Here is an exception to the typical book in this catalogue. Instead of describing the Southwest, it covers adventures in the far north, the very far north. A group of eight pilots in two planes set out from Baker Lake in the Northwest Territories of Canada in September of 1929. Unfortunately, they encountered bad weather and were forced to land along the Arctic coast. While landing safely, they discovered they did not have enough fuel to complete their journey. They figured they could reach rescue on Victoria Island, but the Arctic strait was not yet frozen. They would have to wait until it froze to make their escape. That would take a couple of months. As they had no way of communicating home, a massive search was launched, one of the largest Canada had ever seen. It was to no avail. Fortunately, the pilots had one piece of very good fortune. They landed near an Inuit camp, and the natives supplemented the rations aboard their planes and provided help surviving the extreme weather. Finally, when the Arctic froze, the men were able to find rescue. One of the participants, Richard Pearce, wrote about their adventure in 1931, the book titled Marooned in the Arctic, Diary of the Dominion Explorers' Expedition to the Arctic August to December 1929. This copy has been inscribed by the leader of the expedition, C.D.H. MacAlpine. Item 23. $325.

Edward Abbey was one of the preeminent environmentalists of the Southwest, a writer who fought against both industrial despoiling of the land and government intrusion in people's lives. Most of his works were fiction, though they often related to real events (such as his "Monkey Wrench Gang" which took on the damming of the Colorado River to flood Glen Canyon). Item 64 is his first work of nonfiction: Desert Solitaire: A Season in the Wilderness. Published in 1968, it is an account of his time as a seasonal park ranger at Arches National Monument (now Park). The park is home to numerous, naturally carved sandstone arches, many very colorful, a spectacular sight still today, though it is doubtful Abbey would have appreciated the increased tourism of recent years. He did appreciate solitude. This copy is signed. $2,000.