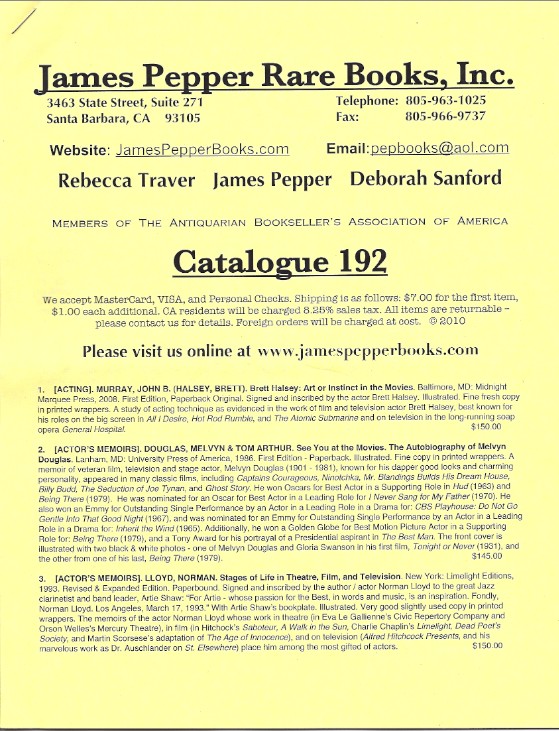 James Pepper Rare Books has printed their Catalogue 192. As usual, it is filled with items relating to film, theater, literature, and detectives. Pepper regularly supplies us with items related to names we know, faces we recognize. If they were known in Hollywood or New York, they will likely find their way into the pages of a Pepper catalogue. Here are a few of them from this latest edition.

Item 8 is a copy of The Funny Men, written and published in 1956 by one of them, Steve Allen. Allen was the original host of the Tonight Show, had his own enormously popular primetime show in the 1960s, and was also a prolific songwriter. This copy is inscribed to one of the "funny men" he writes about, Groucho Marx. Writes Allen. "To Eden [Groucho's third and then wife] and Groucho, From the man who predicted Martin and Lewis would split up." Dean Martin and Jerry Lewis broke up their very successful comedy act that year. Allen's book is about the great comedians of the era, including Marx, Jack Benny, Bob Hope, Sid Caesar, and others. Priced at $650.

Item 52 is a copy of Wisdom. Conversations with the Elder Wise Men of Our Day, that "day" being 1958. It was once the copy of famed bandleader Artie Shaw. It is inscribed to him as follows: "To Artie Shaw, with respect & admiration. F.D. Roosevelt, 9/11/61." Wait a minute. It is entirely possible that Franklin Roosevelt would have inscribed a book to Shaw in the 1940s, both being great figures in their fields at the time, but in 1961? Roosevelt died in 1945. Actually, this was not a ghostly visitation from the former President. Shaw had a humorous habit of inscribing books to himself on behalf of authors and other notable people. It was evidently something of an inside joke and as a measure of security. Perhaps Shaw also wanted to wreak havoc on future book collectors as well. The "FDR" inscription is in the handwriting of none other than Shaw himself. $50.

Here's a biography you may not have known existed, but then again, it is new: 'Otay!' The Billy 'Buckwheat' Thomas Story. It was written and signed by the author and son of its subject, of the same name (the same name being Bill Thomas, Jr., not Buckwheat, Jr.). Thomas was one of the stars of the 1930s-40s Our Gang series, portraying the rascal with the somewhat garbled speech and penchant for saying "Otay." Item 102. $75.

If a Buckwheat biography isn't strange enough, how about one of Ozzy? If you respond, "why is an Ozzie Nelson biography strange," you are from an earlier generation. No, this is Ozzy Osbourne's biography, lead singer for Black Sabbath and later solo artist, as well as star of the reality series The Osbournes (a family very unlike Ozzie and Harriet's Nelsons). The book's title is I Am Ozzy, and was written by Ozzy and Chris Ayres (who probably provided a lot of help). Fortunately, the written word by Ozzy is easier to understand than the spoken word. Ozzy could have learned better diction from Buckwheat. This copy has been signed by the iron man. Item 109. $100.

Item 7 is a preliminary sketch in charcoal for one of Charles Addams' cartoons. It depicts four delegates to the United Nations. Three are distinguished looking gentlemen representing France, Denmark, and the United Kingdom. The third delegate is a vampire, with fangs and a fiendish smile. His nameplate indicates he represents Transylvania. The other delegates eye him warily. $4,500.