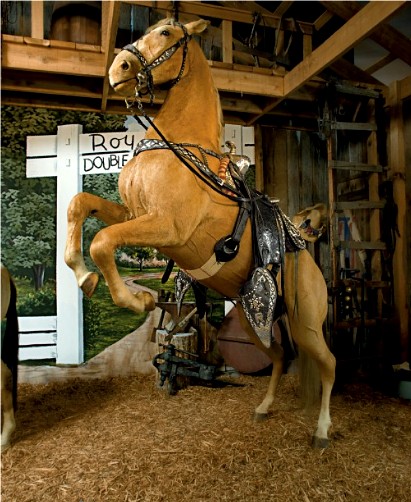 This is a difficult story to write. It is poignant and sad, yet strange and funny, full of meaning and insight, or maybe not so much. It has little to do with books, but much to do with collecting. Call it a story about ephemera. It also has much to say to people of my generation, young at heart but not much else, witnessing the world in which we grew up disintegrating before our eyes. Our kids do not understand, but one day they will. Time moves on, too fast now for us to keep up.

That's too melodramatic. Let's start again. This is a story about an ephemera auction, and quite a healthy one at that. It took in $2.98 million for Christie's last month. It was a single owner sale.

In December of last year, the Roy Rogers - Dale Evans Museum in Branson, Missouri, closed its doors forever. If Roy Rogers could not attract enough visitors in Branson, where could he? Rogers was perhaps America's greatest idol in the earliest years of my growing up. He was the singing cowboy, the ultimate good guy. He wore a white hat and rode his beloved horse, Trigger. He could shoot his six guns with blazing speed, but never really hurt anyone. He would just shoot the guns out of the bad guys' hands. Roy Rogers stood for everything good in this world, and so did Trigger (his horse), Bullet (his dog) and Dale (his wife). He was an "aw shucks" good guy, and I can personally attest to that. I saw him once. He was there for the opening of a Roy Rogers Roast Beef Restaurant in Houston, not a terribly cowboy like thing, except for the beef, but hey, this was long past his matinee idol days. That restaurant, and most of Roy's others, are long gone too.

Roy died in 1998, Dale in 2001. Trigger died in 1965, but Roy did not believe in 'til death do us part. He had Trigger stuffed and mounted and kept him in a museum. He did the same for, or to, Bullet. That may be why Dale made sure to outlive him. When Roy passed on, his son Dusty put all of his and Dale's stuff in the museum, first in California, and later in Branson, the Country and Western capital of America (save, perhaps, Nashville), where tourists who would appreciate his career were most likely to come. And they did, for a while. As Dusty noted in his closing message, Roy's fans were aging, and with the recession cutting back on their ability to travel, the writing was on the wall. There just weren't enough fans left to support a museum dedicated to Roy and Dale. The doors were closed, and the stuff hauled off to Christie's. For collectors who remember Roy Rogers at his peak of fame, here is one insight to be drawn from this story - no collection lasts forever.

So off it all went to Christie's. There were cowboy hats and guns, lots of boots, his saddle, belt buckles, sheet music, and the Jeep from his old TV show, Nellybelle. Roy's 1964 Bonneville, covered with silver dollars, sold for $254,500. Nellybelle took in $116,500, and is headed to New Jersey of all places. Roy's saddle realized $386,500. However, all eyes were on the iconic symbol of Roy's post-1965 life - the stuffed horse Trigger. There was Trigger, still looking grand, front feet raised in the air as if Roy were still in the saddle. He would not be going home with Roy this day. There would be no more Happy Trails. When the hammer came down, Trigger was sold to the highest bidder, like a piece of horseflesh. We don't know whether Roy, as a person, would have been appalled, or as a businessman, pleased. Trigger took in $266,500. He will now work for the Nebraska-based cable network RFD-TV. Bullet will be joining his old pal in Omaha, hammered down for the more modest sum of $35,000. Fortunately, Roy never had Gabby Hayes stuffed.

As we said before, this is a story that may be full of meaning, or maybe not so much. You can take what you want from it. Undoubtedly, your age will influence the way you feel. It may make you sad; it may make you laugh. That's a personal thing. All we can say for now is, Happy Trails to you!