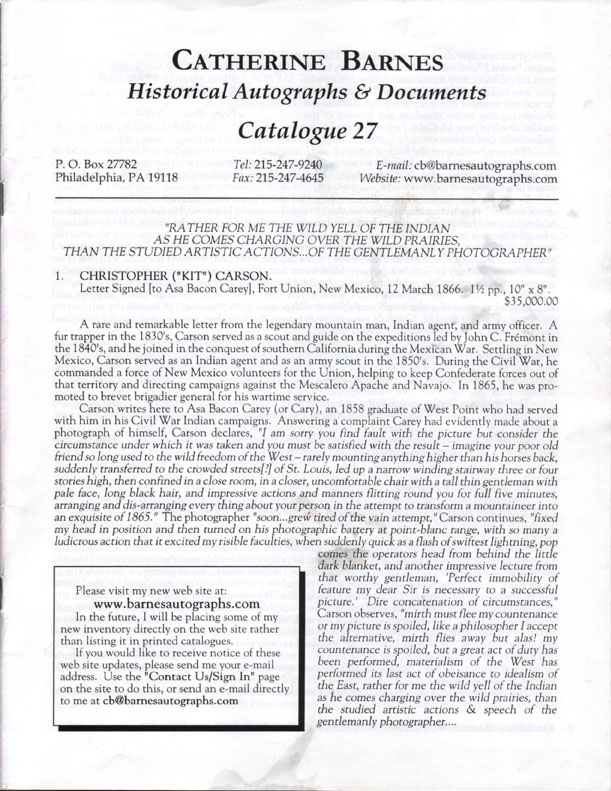 
For example, in the field of bibliography is item 12, Catalogue of Books Printed in the XVth Century Now in the British Museum. This comprehensive work will provide information about much of the incunabula known to exist. $1,250. Oak Knoll has reprinted Jacob Black’s nine-volume Bibliography of American Literature. This one is a major reference for American literature. Item 2. $975. Item 18 is The Celebrated Collection of Americana Formed by the Late Thomas Winthrop Streeter. Streeter created one of the finest collections of Americana ever assembled. It was auctioned in 1968. $750. Subscribers to the Americana Exchange Database will find the records from the Streeter sale within the database.

Item 77 is a reprint of the Catalogue of the Library of Thomas Jefferson. Jefferson not only found time to write the Declaration of Independence and serve as president, but also built what may have been the most important book collection in America at the time. It was his collection that started off the Library of Congress. $550.

Item 200 is a compendium catalogue of 21,470 entries of books offered by the venerable London bookseller Bernard Quaritch from 1875-1877. It even includes pricing, but don’t expect them to honor those prices today. $275. Item 201 is a ten-volume set consisting of 74 catalogues from legendary Philadelphia bookseller A.S.W. Rosenbach between 1904 and 1951. $650. Many Rosenbach catalogues (those of Americana) can also be found in the Americana Exchange Database.

Speaking of Dr. Rosenbach, item 217 is Edwin Wolf and John Fleming’s classic Rosenbach. He was a colorful and convincing man. Oak Knoll describes it as “the best look at bookselling in the 20th century…” It is also a very readable title. $90.

Item 228 includes 356 issues of the Horn Book Magazine about children’s books and their authors. The issues run from 1930-1987. Included, from 1941, is a description of the blitz in London by Beatrix Potter. Hopefully, Peter Rabbit was safely ensconced in his rabbit or fox hole. $1,250.

Item 486 is a two-volume compilation of the Correspondence of Walt Whitman (1842-1875). Elsewhere in this month’s Æ Monthly you’ll find a review of Roy Morris’ moving The Better Angel. Whitman was a generous man who voluntarily spent much of the Civil War tending to the wounded and dying from both sides. The Correspondence includes first source information about this period of Whitman’s life in the form of letters to his mother, as well as letters from many other times of his life. $150.