What Can John Lennon Tell Us About The Book Market? 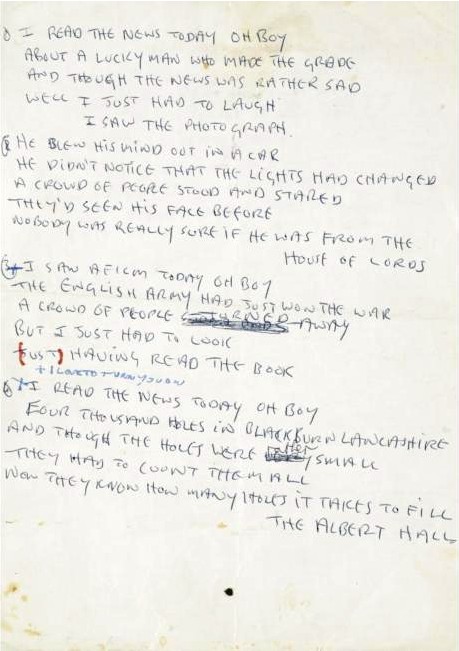 John Lennon's handwritten lyrics to A Day In The Life, courtesy of Sotheby's.

Items in the books, manuscripts and ephemera field do not have to be antiquarian to bring in big money. Indeed, we are witnessing something of a changing of the guard in what is collectible, as personally relevant may be gaining ground on historically significant. It is a point worth understanding in building collections or building inventory to sell to the new collector.

Last month, Sotheby's held a major auction of books and manuscripts. It included signed items by Washington and Lincoln. All told, it took in $2.35 million, with the runner-up piece taking in $218,500. However, the highest priced item topped that by almost $1 million, and took in more than half of the total realized by the entire sale. Rather than being one of the older documents, some of which dated back many centuries, it was one of the newest. Penned in 1967, it was the handwritten original lyrics to John Lennon's A Day in the Life. For those struggling to place it, that's the one that begins "I read the news today, oh boy."

Lennon's handwritten lyrics on a single sheet of paper took in a healthy $1,202,500, well above the estimate of $500,000 - $700,000. One side of the paper has the original draft in cursive, while the other has a neater, printed (in capital letters) rendition. It turns out the initial lyrics were very close to the ones used. Lennon did not do a lot of rewriting.

The similarity between roughly written first lyrics and the actual song may weigh in on the controversy surrounding those lyrics. This song has been analyzed for its deeper meaning as much as anything by Bob Dylan. Who was Lennon really referring to as "blowing his mind out," was the 4,000 holes in Blackburn, Lancashire, referring to needle marks or some other hidden meaning, was "turning you on" a drug reference? Lennon maintained that he picked up the lyrics from some stories he read in the newspaper that day, not because he was trying to pass off some inscrutable hidden messages. The hurried look of the first draft, and lack of substantial changes thereafter, makes one think that Lennon wrote the song as he explained it, not as a vehicle for complex hidden meanings.

Sotheby's also sold another important document last month, and while the results were certainly respectable, they did not blow the estimators away. An early copy of the Declaration of Independence sold for $572,500, just short of the estimate range of $600,000-$800,000. This copy was printed in Salem, Massachusetts, on July 15 or 16 of 1776. News traveled slowly in those days, so it took a little while for the original news to reach Massachusetts, and copies to be printed locally and spread around to the various towns in the Commonwealth.

This was just an isolated event, but there is an interesting comparison between these two auctions. The historic, long highly collectible Declaration of Independence did fine, but not exceptional. The far more recent Lennon document blew everyone away. It did benefit, according to Sotheby's, from having two very determined bidders fighting for it. Still, it is interesting to note that the Declaration, expected to sell for $100,000 more than the Lennon lyrics, sold for $630,000 less, or well under half as much. While the buyer of the latter was not identified, we can presume he or she grew up with Lennon's music, that his life was contemporary to Lennon's. The same clearly cannot be said of the buyer of the Declaration of Independence.

We realize that a couple of random samples do not prove a general case. Nevertheless, there are other examples of buyers bidding up items contemporary to their own lives, rather than that of long ago ancestors. A copy of the first Superman comic sold for $1.5 million earlier this year, and a Batman comic also topped a million. These are hardly works of historic importance, great writing or great art, but they are part of the lives of today's middle age and younger collectors. These people bought comics and Beatles records when they were young, but not copies of the Declaration of Independence. Now, they are collecting the things they know best.

John Lennon taught us about peace and love. Now, perhaps, he is teaching us something about the direction of book collecting.