EBook Reader Prices Drop - and They're Probably Not Done Yet! 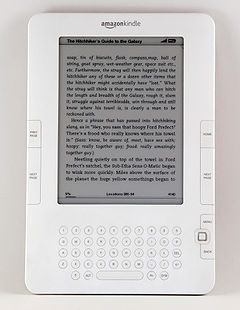 Last month, Mike Stillman wrote about the new Kobo eBook reader which Borders is now selling for $149. Last month, that price was cheaper than the competition, but the price made sense in that the Kobo reader makes some compromises in terms of features. What a difference a month can make! Literally overnight, first Barnes & Noble reduced the price of their Nook 3G-ready (means it's able to download books anywhere you have cellular reception) reader by $60 to $199, and then Amazon immediately followed suit by lowering the price of their Kindle reader by $10 more to $189--both were available for $259 previously. Barnes & Noble also introduced a wi-fi only Nook retailing for exactly $149. Unfortunately for Borders, their Kobo's got the odds stacked against it when matched up against a Nook featuring an identical price-point and more features. As of this writing, it's still priced at $149, but I believe that will either change fast, or they'll focus on selling third party products.

The big culprit in all of this is, yes, we're back to this topic, Apple's iPad. Three million have been sold in the first eighty days of its availability, and over 5 million eBooks have been downloaded from their "iBookstore." It can be an eBook reader clearly, and a lot more. It costs more than double most eReaders on the market now, but that hasn't been a problem since it does a lot more. It has caused problems for other readers because it has exposed what the public values—-multimedia content. According to research firm Forrester, eBook reader prices are actually going to need to get below $100 to truly see widespread use. So being half the price of an iPad isn't enough. What they found was the large majority of adults just don't see the need for an expensive reader, but that around $100, the price was low enough for them to be enticed. The value of reading alone is low to consumers. For the iPad, it's essentially an added bonus that you can use it to read.

The iPad's success, like the iPhone's, is prompting companies around the world to try to figure out how they can match the design and function. Tablets are only going to get cheaper and more widespread, and for makers of eBook readers who are already feeling the heat, it's only going to get hotter. It's already projected the iPad will outsell all eBook readers in the U.S. combined this year, and that's not to mention all other tablets and smartphones that have the ability to read eBooks.