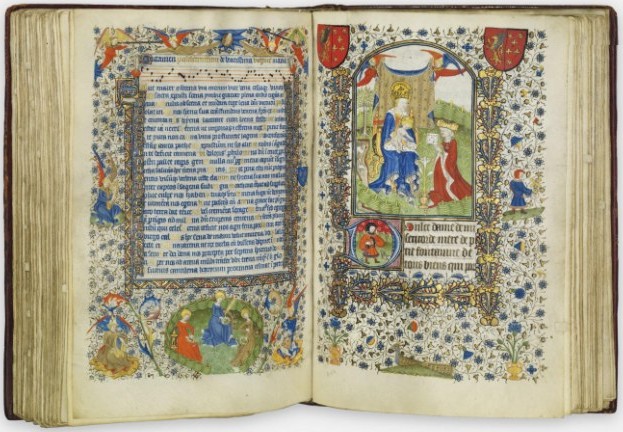 The Cauchon Hours will likely sell for $1-$2 million.

Christie's will be auctioning what they describe as "the most valuable collection of illuminated manuscripts ever offered at auction" in London on July 7. The mere 48 items are projected to take in £11 to £16 million, or roughly $17-24.5 million in U.S. Currency. Throw in buyer's premiums and this sale could approach $30 million. For a sale in the book category, this amount is astounding. Of course, these are not primarily printed books, but manuscripts that run along the border between text and art, an admittedly more expensive category.

The items set to be auctioned are known as the Arcana Collection, which could refer to either the rarity and obscurity of the works, or the unknown nature of its collector. He has chosen to remain anonymous. [Editor's Note: see addendum at end of article] He has been collecting this material for three decades, and we understand he is an American businessman. Christie's notes that he has "generously supported public institutions with holdings in this field." Here is another interesting point - the full name of the sale is The Arcana Collection: Exceptional Illuminated Manuscripts and Incunabula Part I. Yes, there is still more to come. We do not know how much more material there is, or how many further sales will be necessary, but it is probably safe to assume that there are more very valuable works to come.

Margaret Ford, Head of Books and Manuscripts at Christie's, London, stated, "This is a truly exceptional collection which presents illuminated manuscripts and incunabula in all their glory. They are masterpieces of medieval and renaissance art, many commissioned by important patrons. It has been the aesthetic aspect of these masterpieces which has appealed in particular to this private collector and excited his curiosity to acquire and learn more about them." Ms. Ford also pointed out that many of these works come with a most distinguished provenance.

Expected to garner the highest price is a 13th century Italian manuscript Bible, with extensive and "exquisite" painted illustrations. It was apparently produced for the use of a convent of Dominican friars, though some of the "fantastical creations" are not what one would usually expect in an order's Bible. Its calendar notes the passing of Theodoric Borgognoni, who was a Dominican friar, Bishop of Cervia, and one of the most important surgeons of his day, developing the use of antiseptics and anesthetics, and personally serving popes. The estimated price for this Bible is £2,500,000 - £3,500,000 (US $3.8 - $5.4 million).

Almost as highly estimated is a Book of Hours and Psalter from the 14th century that belonged to Countess Elizabeth de Bohun. She was from one of the noblest of English families and could therefore have afforded the best. Her great-granddaughter would become the wife of Henry IV (though not Queen as she died before he ascended to the throne), but her great-great grandson ruled as Henry V. The Psalter's later provenance includes William Waldorf Astor, who loaned it to an exhibition used to help raise funds to build the Statue of Liberty. This book is estimated at £2,000,000 - £3,000,000 (US $3.1 - $4.6 million).

Addendum: The Financial Times of London announced that the seller is "Ladislaus von Hoffmann, a secretive Washington-based financier."