L.A. Book Collector Wins Right to be a Collector, Not a Dealer 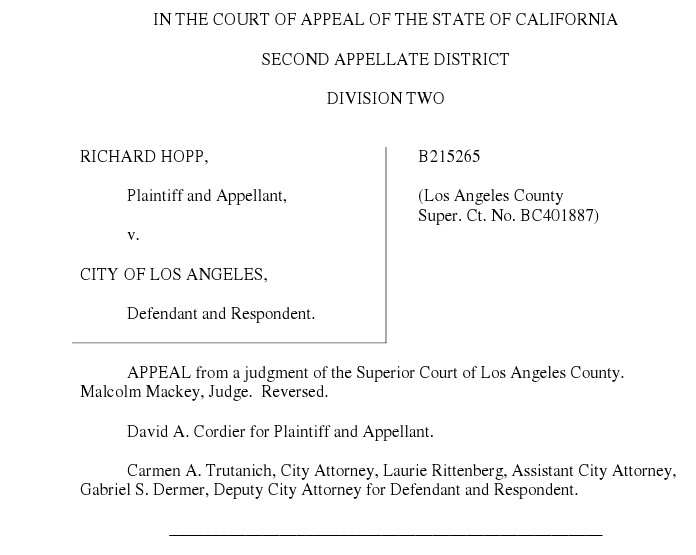 Richard Hopp wins his appeal against the City of Los Angeles.

You can fight city hall. Richard Hopp recently won a long and very strange legal dispute with the City of Los Angeles to be classified as a book collector, not a book dealer. He will not need to obtain a police permit, nor keep the detailed records required of booksellers in Los Angeles. What makes this case so odd is that Los Angeles ever attempted to make this case, and that the city came so close to winning it.

One has to assume that Los Angeles believed Mr. Hopp, a bail bondsman by trade, must be doing more than just collecting books. However, they had no evidence to back up any such beliefs. Odder still, they went to court against him without attempting to secure evidence he was selling books, or even making such a claim. It was as if a police officer, seeing you driving a shiny new sports car, assumed you must be speeding at times, and thereby ticketed you for going 30 miles per hour in a 30 mph zone. In court, they in effect argued that the law made it illegal to go within the speed limit as well as over it. Amazingly, the city won the first round in court. On appeal, Mr. Hopp, and common sense, prevailed.

Richard Hopp's troubles arose as a result of his unusual method of obtaining books. Most collectors purchase their books invisibly, visiting dealers, shows, garage sales and the like, or buying online. Mr. Hopp's style was far more open. He would advertise for books online and in print publications, and he would attend shows and set up a "buying booth." Most likely, the L.A. police looked at this activity and assumed no one could be buying in such a conspicuous manner without selling at least some of what he bought. They told him he needed a dealer's permit.

Mr. Hopp responded by taking the city to court. Rather than wait to get fined for not having a permit, he sought a "declaratory judgment," a court judgment which stated he did not need a permit. When the two sides appeared in court, the city still had no evidence that Mr. Hopp had ever sold a book. He explained that he purchased books and ephemera for his own collection, and items included in groups he bought that he did not want he gave to charity or discarded. Los Angeles then countered with its odd, legalistic argument - that it did not matter whether Mr. Hopp ever sold a book, he was still a dealer in the eyes of the law.

Many a legal case turns on something as small as a preposition, and in round one, the City of Los Angeles turned an "or" into a surprising legal victory. The Los Angeles ordinance that regulates "secondhand book dealers" defines such dealers as persons "engaging in, conducting, managing or carrying on the business of buying, selling, exchanging or otherwise dealing in secondhand books..." The magic word here is "or." Taken literally, the statute does not require that a dealer be buying and selling, buying or selling is sufficient argued the City. Mr. Hopp undeniably was buying. To make some sense out of why it was attempting to apply this wording so literally in Mr. Hopp's case, the City argued that purchasing books at events like flea markets provided an opportunity for petty thieves to fence stolen library and other books. Forcing public buyers such as Mr. Hopp to carefully account for their purchases would make it more difficult for thieves to fence their stolen merchandise.

The Court accepted the legalistic definition and ruled for Los Angeles, but Mr. Hopp was not ready to give in. He appealed. The Appeals Court took a broader look at the statute. Rather than focusing on the word "or" in the phrase "business of buying, selling, exchanging or otherwise dealing," it focused on the word "business."

The Appeals Court looked to other L.A. statutes which define a "business" as an occupation "which provides services, products or entertainment." It concluded that providing such things implies providing them to others. Mr. Hopp was providing nothing to anyone. Buying books and entertaining oneself by reading them hardly constitutes a "business," the Court concluded. It then went on to note that in other legal decisions courts have considered a "business" to be a commercial venture, one intended to produce a profit. There was no evidence or argument that Mr. Hopp was attempting to earn a profit through his activities. All that was shown was that he bought books and collected or donated/recycled them. That, the Court ruled, does not constitute a "business."

As for the City's argument that it needed to regulate public buyers such as Mr. Hopp to prevent fencing of stolen books, the Court stated that this suffered from the same logical shortcoming as the case in general. Part of fencing a book is selling it for a profit. There was no attempt at a profit in Mr. Hopp's activity. You can hardly prevent fencing by targeting people who do not resell the merchandise they buy.

We do not denigrate the seriousness of the challenge the police forces in L.A. and elsewhere face dealing with crime. Cutting off the market for stolen goods is a critical element to preventing goods from being stolen in the first place. Nevertheless, the rules must bear a reasonable relationship to the goals they seek to achieve. Ones that burden thousands of innocent people in the hope of finding an occasional crook are unreasonable impositions on people's ability to lead their lives free of constant intrusion. The City's interpretation of its statute could have subjected every book collector to burdensome and possibly costly requirements. Your child could be required to secure a police permit to collect comic books. This is not reasonable. Technically, this was a victory for Mr. Hopp, but in reality, it was a victory for all book collectors in Los Angeles, and even more importantly, a victory for common sense.