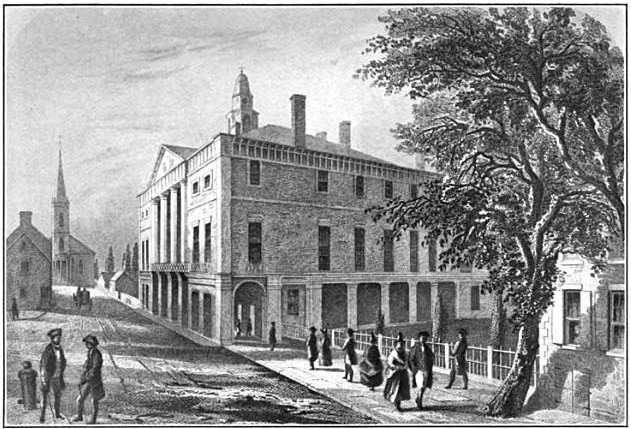 It seems that time trashes the memory of even our greatest heroes. First we learned that Thomas Jefferson slept with one of his slaves, had children, and allowed his own children to grow up as slaves. Now we learn that George Washington didn't always return his library books. While difficult enough to accept that Jefferson had such faults, it's virtually impossible to accept as truth that Washington could have committed such a wrong.

The news broke as a result of some entries in an old ledger book of the New York Society Library. While not as well known as the New York Public or other libraries in New York, such as the Morgan, it is, in fact, New York's first library. Formed in 1758 as a private society, it has continued in existence ever since, though it was effectively shut down and ransacked by the dastardly British during the Revolution. After the Revolution, the members regrouped, and in 1789, set up quarters in the old City Hall, recently renamed Federal Hall. In 1789, and for the first couple of years for the new republic, New York was its capital, only to be replaced first by Philadelphia, then Washington. One can only wonder whether those early Americans would have named their capital after this man if they knew then what we know now.

In 1789, Federal Hall was also home to Congress. The New York Society Library, the only one in the city, was effectively the Library of Congress too. It was at this time that Washington began borrowing books from it. On October 5, 1789, Washington borrowed copies of Law of Nations, a treatise on international affairs, and volume 12 of a 14-volume collection of debates from England's House of Commons. They were due on November 2. The library is still waiting.

The volumes were checked out simply to the "President." The ledger does not show a return date. Of course, one can argue that the librarian neglected to note their return when President Washington brought them back. I like to believe this is the answer. Unfortunately, there is one piece of damning evidence discovered by the librarians. The library still holds the set of House of Commons debates, and when the librarians looked them over, they discovered all were still there, except... volume 12. Obviously, these debates are not in such great demand as it took over 200 years for anyone to notice a volume was missing.

As we all know, libraries are desperate for funds these days, so the folks at the New York Society computed Washington's overdue book fees and adjusted them for inflation. It turns out the father of his country has wracked up the mother of all overdue book fines. The bill is now over $300,000 and rising. That's 300,000-plus images of this scofflaw. Though other notables such as Alexander Hamilton, John Jay, and even the exceedingly seedy Aaron Burr all managed to return their books, the New York Society Library has decided not to press charges against Washington. I'm not sure whether this is a principled or simply practical decision. After all, it will be hard to collect from Washington, dead 210 years, and he left no descendants who can be hounded for his debts. You can't take your money with you, but neither do you have to take your debts. Washington is going to get away with this one.