Colorado Book Seminar Scheduled; Display of Forgeries at the Rosenbach 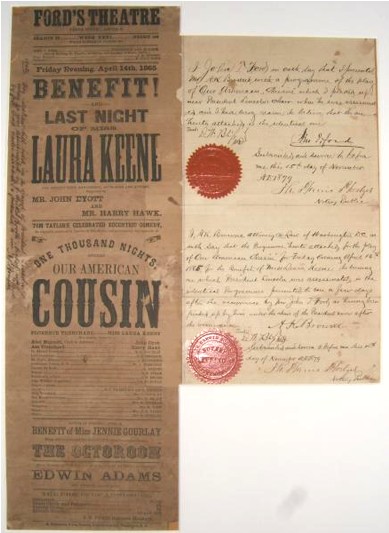 This fake playbill was supposedly found near Lincoln's seat the night he was assassinated.

The 32nd annual Antiquarian Book Seminar is scheduled for August 8-13, 2010, at Colorado College in Colorado Springs. This seminar carries a reputation as one of the best places to learn all about the book trade. It is not so much a place for amateurs as for booksellers looking to raise their skills and knowledge to the highest level. Some of the deans of the trade are among the instructors, including the founder of the Rare Book School at the University of Virginia, Terry Belanger. Among the topics covered are finding, evaluating and pricing books, buying and selling online and at auction, selling to libraries, setting up a database and creating a website, conservation and preservation, identifying forgeries and theft, and writing descriptions. Those who sign up before May 1 will receive a $100 discount. To learn all about the Colorado seminars, go to www.bookseminars.com.

The Rosenbach Museum and Library's ongoing exhibition on fakes, Friend or Faux: Imitation and Invention from Innocent to Fraudulent, has been updated to display a series of new items. The Philadelphia institution, once home of famed bookseller A.S.W. Rosenbach and his brother Philip, will continue the display until July 11, 2010. The exhibit is focused on all types of fakes, from deliberately created frauds to innocent copies made for personal use that may have unintentionally fooled others later on.

Among the items on display is a fake playbill from Ford's Theater, supposedly picked up off the floor near President Lincoln's chair that fateful night. It came with an affidavit from the theater owner that it was real, but it was a fake anyway. These playbills are referred to as "Buckingham Reprints" after the doorkeeper who sold the facsimiles. Tacky.

There are some of William Henry Ireland's outrageous forgeries of Shakespeare, from the turn of the 19th century. Ireland's father was a devoted Shakespeare collector, which led William to conclude there could be some good money in "discovering" new Shakespeare items. He started using old paper and ink to create fairly innocuous documents with Shakespeare's "signature," but when he realized his father and others' gullibility, he began to expand his production. William Ireland began producing manuscript Shakespeare plays with his margin notes, love letters, and finally, an entirely new Shakespearean play. It was actually put on at a London theater, but it bombed. Ireland was a great forger, but not so good a writer.

Another item on display is a letter from Thomas Jefferson to artist Gilbert Stuart, most famous for his Washington portrait, a copy of which everyone with a dollar to his name possesses. Supposedly, Jefferson wrote the letter in an attempt to retrieve his own portrait so he could make copies. However, it turns out the letter itself is a copy, produced by Jefferson's "polygraph," a mechanical copying device used in the days before electronic copiers were invented.

The Rosenbach also has several seminars and talks planned, including one on May 8 that will help book collectors and sellers understand how books and prints are determined to be fakes. For more on the exhibit you can visit their site by clicking here.