Key Players in the Attention Age 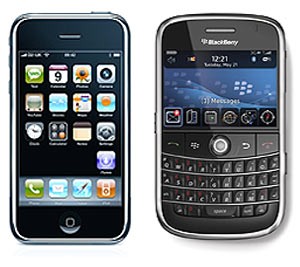 The Apple iPhone and the RIM Blackberry Bold.

The Internet contains all sorts of mechanisms that allow collectors and book dealers to find each other, and enrichen their book-related worlds. Facebook has finally reached a saturation level in the public eye that I would suggest booksellers to make an account for their company, and collectors one for themselves! From there, having access to an image-hosting site like Flickr or Picasa is a nice, free resource, and the same goes for YouTube as a free video-hosting and streaming service. In this month's follow-up, I've gone over a few of the main companies, services and concepts that are powering today's Attention Age, and provided an example or two of how they could fit into book collectors' and dealers' lives.

Facebook and Myspace are two separate, competing social-networking websites. They began as sites accessed by mostly younger people, especially Facebook requiring a school email initially for registration, but have become near-household names now. They allow users to register which then creates a page  for themselves, or their band, or their company. This concept of a person's personal page and that attention-seeking trend paved the way for Twitter to really take hold later. In terms of books, bibliophiles can connect with other like-minded people, both around the world, and by doing local searches.

Twitter takes a single function that sites like Myspace and Facebook introduced, and centers their entire website around that one functionality. This task is known as the Status Update. To be honest, I don't know if Myspace or Facebook came out with it first, but essentially, all three sites allow you to update your status  which is then displayed to friends. Your status could be any of the following (and virtually anything you can think of): sleeping, working, killing time on Myspace, etc. The only difference with Twitter is that's all it does. It could be used by dealers to keep their mailing list informed of their latest catalogue release, or of an upcoming auction.

Flickr and Picasa Web Albums are two separate, competing image-hosting and sharing sites. There are more out there, but these are two of the most well known and established. They are free, and are tied to either your Yahoo! or Google accounts, respectively. The inclusion of cameras on many cellular phones and laptop computers has increased the ability and convenience for people to take pictures, so they are! These sites are also very handy when one has a blog & some blogs are only of images! If you're selling books online, you'll be more effective with images. These are free places for you to keep them!

Flash is a freely downloadable, multimedia platform originally developed by Macromedia, but is now distributed by Adobe Systems. It is very popular for adding animations and user-interactivity to websites. It is what sites like YouTube and MySpace use for their video. It is notable that it requires a fast, broadband connection, and a relatively up-to-date computer to be effective.