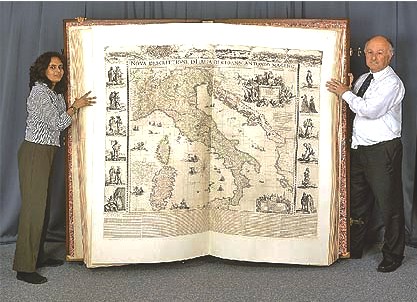 There will be a magnificent display of maps at the British Library in London this spring and summer. The title is Magnificent Maps: Power, Propaganda, and Art. One hundred great maps will be on display, but one group in particular has gathered most of the attention. It is known as the Klencke Atlas, and for those who believe size is more important than anything else, this is the greatest book ever made. It is that big. In fact, it is believed to be the largest book ever made.

Actually, it's quite amazing that the Klenke is still the largest book ever produced, as it is now 350 years old. It was created back in 1660, along with two other almost as large atlases. This was the era of the great Dutch maps and atlases, so not surprisingly, these books were created in Holland. The Klenke Atlas was procured by one Johannes Klencke and several fellow Dutch merchants, although it appears that Prince Johan Maurits, one-time Dutch Governor of Brazil, who was involved with the other two oversized atlases, may have been connected to this one as well. Whatever the precise background of its production, the large atlas was presented as a gift to King Charles II in 1660, in honor of his restoration to the English throne. This may have been presented out of admiration and affection, but most likely the Dutch merchants hoped to gain some influence. However, there is some irony to such a spectacular gift as in time, Charles would go to war with the Netherlands.

It is believed that Charles displayed the atlas in his palace, and it remained in the Royal Library until 1828. At that time, it was passed on to the British Library. As a result of serious deterioration of the bindings, it was rebound in the 1960s. However, its pages have never before been put on public display. It is only now, 350 years after its production, that the public will have a chance to peer inside of this mammoth volume.

The atlas measures just under 6 feet high, a little over 3 feet wide. When opened, the two-page maps are a good 5 feet by 5 feet. It contains 37 maps, and the weight is such that it reportedly takes 6 men to lift it. We are not sure that this atlas is very practical to use, but it certainly is suitable for providing great detail in its maps.

This is just one of the maps and atlases on display at the British Library from April 30 through September 19, 2010. Peter Barber, Head of Map Collections at the British Library, has stated that the purpose of the exhibit is to show that maps are more than just exercises in geography. They are works of art, and he describes the exhibition as "a visual extravaganza." Mr. Barber and Tom Harper are producing a book, also titled Magnificent Maps: Power, Propaganda, and Art, to accompany the exhibit. It will be available in April.