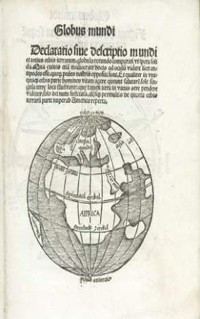 Early map shows a small piece of the New World in the left corner.

Some surprising, interesting, and historically important material regularly finds its way to the auction rooms. There is much to be found and learned if you keep your eyes open. Here are a few items that caught our eye as they passed through the rooms recently.

This one has to be included among the surprises, at least for the auction house's estimator. Its significance must have escaped that individual's notice, but it did not slip past the notice of bidders. On February 2, French auction house ALDE held an auction of antiquarian and modern books. All told, there were 477 lots, anticipated to take in something between €224,000 and €291,000 (US $307,000 and 398,000). Among them was an unassuming 14-page pamphlet published anonymously in Strassburg in 1509, with the Latin title, Globus Mundi Declaratio sive descriptio mundi...

It must not have appeared all that significant, but to those who collect Americana, or European Americana, this is a major piece. It contains one of the first maps to display America, albeit a very tiny piece, and it is the first book to unreservedly give this new land the name "America." This is of major significance as it helps define how the New World came to be known as "America," for Amerigo Vespucci, when it really should have been named "Columbia" for Christopher Columbus. He was the "discoverer," preceding Vespucci.

On the lower left edge of the globe-shaped map, west of Africa, is a tiny edge of a continent, labeled as the "new world." Then, in the text, the unknown author compares the world to the human body, writing, "The head is the East or Asia; feet the West and America, newly discovered, fourth part of the globe." Africa and Europe constituted the arms. Just two years earlier, Martin Waldseemuller, in his 1507 map, had made reference to the land as "America," though he may have simply been confused as to its discoverer. When he republished his map a few years later, he removed all reference to "America." However, these early notations determined how we would label the world. So, once a year we honor Columbus by celebrating his day, but every day, millions of times all over the world, we remember Vespucci by uttering his name.

An auction containing some spectacular manuscript material took place in late January at Sprink Shreve Galleries in New York, a house more often associated with stamps. We write more about this $8 million auction elsewhere in this issue of AE Monthly, but here we will focus on a couple of the items, rather than the auction itself. The collection came from the estate of Floyd E. Risvold, of Edina, Minnesota. Risvold, who traveled the American West in the 1930s and 40s and developed a love for all things Western and American, died last year at the age of 97. He returned to Minnesota where he operated the family clothing distribution business while building his collection. He sold the business when he reached the age of 72, but kept and increased the collection for the remaining 25 years of his life. His collection contained items relating to the early days of the United States, the Civil War, western expansion, Indian treaties, the Pony Express, railroads, Mormons, the fur trade, California Gold Rush, and the Minnesota Territory. His varied collection was driven by a desire to find one or a few key documents on a subject, rather than a wide array of material focused on a small niche.