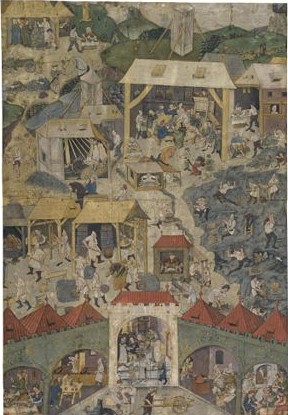 No one will accuse 2009 of being the greatest year ever for matters of finance, but as we look back at auctions in the field of books and ephemera, we find it wasn't all that bad either. Perhaps we have reached a bottom. The AE Top 500 for 2009 reveals that there was still a lot of activity at the high end of the book world. Each year, the Americana Exchange looks at several hundred thousand books and related material sold at auction and compiles a list of the top 500 prices. For the record, the 500th most expensive book still would have put you out for $43,750. Regardless of the economy, there are still buyers at the top.

The price at #500 provides an interesting comparison to last year. In 2008, the price at the bottom of the list was $51,000. That's a decrease of 14% from last year, a sign that prices have dropped year to year. However, 2008 was a split personality, a strong start, bad finish. For the first six months, the comparable value was $61,000. For the second half, it was $43,750, a huge intra-year drop (28%), but the exact same amount as for 2009. The implication is prices have stabilized, at least at the high end of the book market. After last year's collapse, stability sure looks good.

Near the end of this article, we will provide a link to the complete list of the Top 500. Now, let's take a look at some of the highlights.

Topping the list for most appearances were George Washington and Charles Darwin, with seven each. All of Washington's listings were for manuscript items, all of Darwin's for editions of the same book, On the Origin of the Species. Following with six were perennial favorites Charles Dickens, Abraham Lincoln, the Bronte family, and a man who lived more than a millennium before printing, Ptolemy. Edgar Allan Poe was next with five, but three of those were in the top 27, four in the top 68. Here are some specifics.

Photographs normally don't belong on a books list, but this one is an exception. It is a photograph of the three Dykes sisters, ages 6, 8 and 10, taken in 1862 by Charles Lutwidge Dodgson. Dodgson was a college teacher who had a few side hobbies, including photography and writing. He would become better known for the latter a few years later when, under the penname "Lewis Carroll," he wrote about Alice's adventures in Wonderland. #488. $45,072.

At #337 we find an autographed letter from the notorious John Dillinger to his niece, signed "Johnny." "Johnny" promises this will be his last Christmas in jail, which it was. The following March he escaped, only to be shot down in Chicago that July. $60,400. Three places higher, at #334, was a library of chess books and much personal manuscript material from the eccentric and unpleasant American chess master Bobby Fischer. Fischer left it in a storage unit when he departed America in 1992, never to return. $61,000.