400th Anniversary of Freedom of the Seas Celebrated at Yale Exhibition 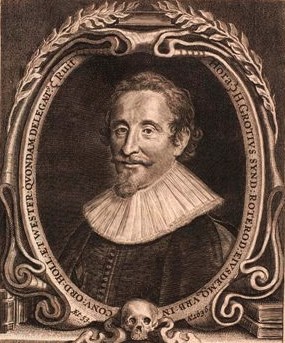 Freedom to navigate the seas is a crucial element of free trade among nations. For many, their very survival requires freedom of trade, yet this freedom was not always recognized. Centuries ago, there was essentially no other way to trade with nations not on your border. However, at that time, many nations held to the proposition that a nation's sovereignty extended indefinitely from its coast into the sea. It could present a nightmare for anyone attempting to follow the coastline of a continent.

In the Americas, this principle provided the Spanish and the Portuguese with a virtual monopoly of the seas. In 1494, Pope Alexander VI had divided America between Spain and Portugal, using a north-south axis that eventually proved very favorable to Spain. Portugal got everything to the east of the line, Spain everything to the west. Explorations would later show that Portugal got Brazil, while everything else in the Americas lay west of the line.

Of course, nations not named Spain or Portugal would in time chafe under these rules. The British, who would renounce Catholicism during the reign of Henry VIII, had little use for rules promulgated by a Pope. It was into this setting that Hugo Grotius issued his pamphlet Mare Liberum in 1609. He was commissioned by the Dutch East India Company, which shared England's interest in freedom of the seas. Their interest was not so much the Americas but the other side of the globe, where the semi-private, semi-government Dutch East India Company was in the process of establishing an empire, particularly in what is today Indonesia. However, Grotius would soon be joined in his arguments for freedom of navigation by the leading English legal scholar of the day, John Selden. A pamphlet war would erupt, with those favoring freedom of the seas eventually winning out. In time, boundaries would be set at just a canon's fire distance from the coast, three miles from the shoreline.

An exhibition of materials from this critical time to freedom of the seas is taking place at the Lillian Goldman Law Library at Yale University in New Haven, Connecticut, from now through January 2010. Entitled Freedom of the Seas, 1609: Grotius and the Emergence of International Law, it includes numerous items from the collections of Yale, Harvard, and private collector Edward Gordon. It is curated by Gordon and Mike Widener, Yale's Rare Book Librarian. Gordon is a former President of the American Branch of the International Law Association who has taught courses at numerous universities.

You can learn more about this exhibition on the website of the Yale Law Library.