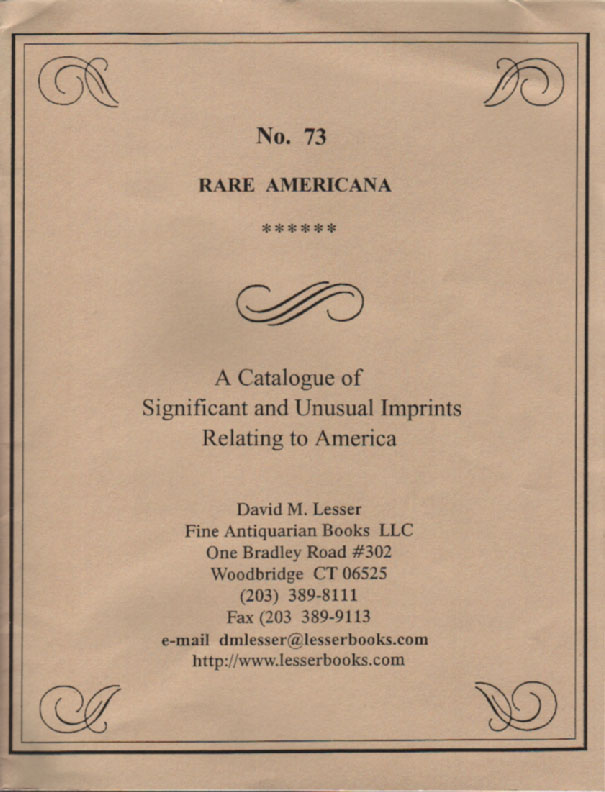 This month we review three catalogues of Americana, from David Lesser, Flo Silver, and Harold Nestler. They cover the United States, South and Central America, and New York State, respectively. We’ll give you a preview of these interesting catalogues, but if they cover areas of interest, we recommend that you contact the booksellers directly.

Our first catalogue is entitled “No. 73 Rare Americana – A Catalogue of Significant and Unusual Imprints Relating to America.” Published by David M. Lesser Fine Antiquarian Books, it is a trove of uncommon historical American documents, primarily from the late 18th and 19th centuries. Included are many pamphlets and other printings from political conventions, the courts, sermons, and other voices begging to be heard. That many are fairly obscure makes them that much more interesting, and few are priced to break the bank.

Item #1 in this catalogue is not one of those inexpensive pieces. It is a three-volume set from John Adams entitled A Defence of the Constitutions of Government of the United States… First published as a single volume in London in 1787, this 1797 Philadelphia printing lays out his defense of the institutions created in America. Price $2,250.

Even earlier, items 6-11 are copies of Nathaniel Ames’ almanacs from the 1760s. Included is the issue with “Vacations at Havard College,” with the notable institution’s name misspelled. The missing “R” is no bother. Every Bostonian knows that “R” is a silent letter in Massachusetts anyway. $275-$375 each.

Printed around the same time is Scott Thomas’ Vindication of the Divine Inspiration of the Holy Scriptures. This is an attack on Thomas Paine’s Age of Reason by an angry clergyman. Item 137. $275.

Another clergyman is Francis Asbury. Asbury came to America from England in 1771 and became an itinerant preacher and organizer for Methodism. His An Extract from the Journal of Francis Asbury… recounts his travels through the south and frontier of America following his calling. Item 14. $1,000.