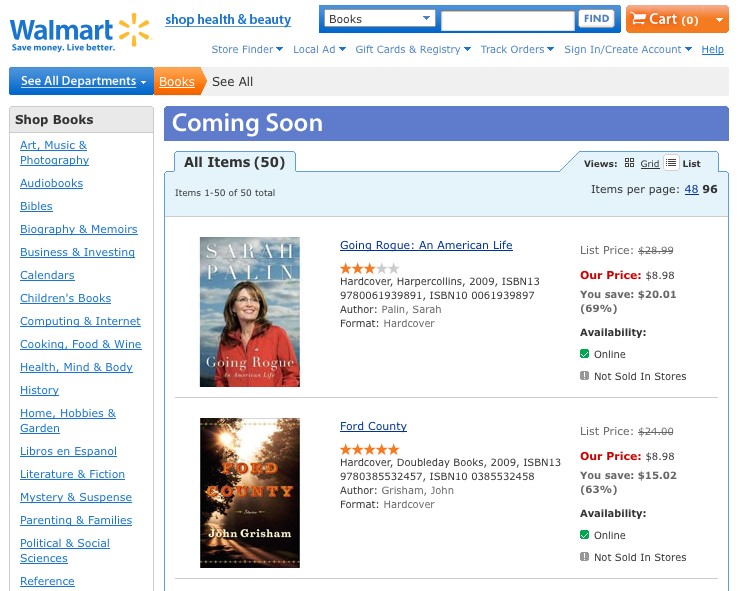 We are at a moment of momentous change in the book industry. Where it all will play out remains anyone's guess. All we know is that it will soon be very different from what we have known before. Elsewhere in this month's issue of AE Monthly we tackle the court battle of Google vs. Amazon, Microsoft and others over the selling of digital copies of copyrighted books, and the plunging prices of and growing demand for electronic book readers. Here are three more book stories, two involving printed books. In one, Wal-Mart has slashed the price of some new, printed books to amounts so low they are below cost, while HP, the large computer manufacturer, has jumped into the business of print-on-demand books. Meanwhile, Barnes and Noble, the largest bricks and mortar printed book retailer, announced the introduction of their own electronic reader, the Nook, as they try to muscle in on the ebook field. Why all of this interest in the book business? For all the talk of books being in decline, there are a lot of very large companies making big bets on the business. Perhaps they know something?

One of the greatest price wars the book industry has seen broke out when Wal-Mart, tired of watching Amazon sell $10 ebooks, countered by offering selected, popular new titles through Walmart.com for $9.99. These are not ebooks, but hardcover copies, hundreds of pages of ink and paper at less than the price of an ebook. Amazon matched the deal, and Target jumped into the fray announcing they too would offer selected titles at comparable prices. Wal-Mart quickly upped the ante, dropping the price to $8.99, clearly below cost. Amazon matched them. The last we saw, Wal-Mart had inched their price down another penny, to $8.98. Among the new releases offered at this incredible price are books by Stephen King, Michael Crichton, Dean Koontz, Barbara Kinsolver, and - oh my gosh - Sarah Palin.

One can only wonder where this is going. Wal-Mart has the money and the nerves to crush just about anyone on price. However, Amazon is in the midst of enjoying unparalleled prosperity. Optimistic forecasts sent their stock soaring a week ago. Amazon's stock leapt by 26%, reaching an all-time high, finally eclipsing its high water mark of a decade ago at the peak of the internet bubble. However, one group that may not be able to withstand this fierce competition is the independent bookseller. The American Booksellers Association, their voice, has asked the Justice Department to investigate what it considers predatory pricing. Wal-Mart and Amazon may have the deep pockets to sustain this war, but independent sellers, already struggling through this difficult economy, do not have such leeway.

While cutting the price so low might sound like a positive for the printed book, there is a great risk here. Books cannot be sold below cost forever. The large retailers may push publishers for lower costs. Meanwhile, readers may become accustomed to $9 books. Long term, the only way publishers may be able to cut prices, and buyers continue to get books for $9, will be through electronic copies, with no costs for paper and printing. Crazily cheap pricing could prove to be a dagger in the heart of printed books, even if short term it boosts sales.