<i>In The News:</i> A Strange Problem at a Library, Upcoming Events. 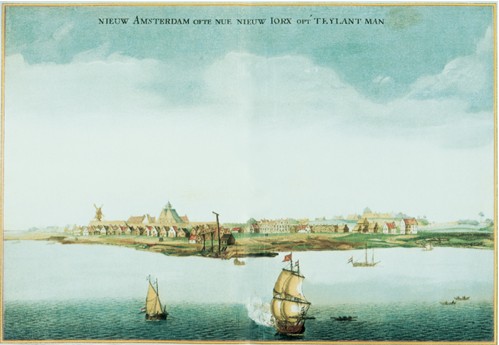 New York (then New Amsterdam) when it was just a small, rural settlement.

There is a strange case from the Denver Library, and some interesting exhibitions In The News this month. It's been a tough time for the Denver Public Library lately. The city's 2010 proposed budget calls for the closing of one branch and reduced hours at the others. However, nothing quite prepared the librarians for this unexpected situation, a case where a patron's good deeds turned bad. A 69-year-old gentleman had been borrowing books from the library as part of Project Gutenberg. This is a scanning project where texts of old books are scanned and digitized, and thereby preserved for eternity. He was not a scanner, but a proofer. He would borrow antiquarian books from the library and compare them with previously scanned texts, to make sure others' scans were complete.

When his job was done, the gentleman would, naturally, return the books to the Denver library. That's where the problem arose. Seems his apartment is infested with bedbugs, which would hitch a ride on the books. There is probably nothing easier to pick up and harder to get rid of (save for STDs) than bedbugs. Sections of the main library became infested. Three times parts of the library were fumigated, and 31 old books, some rare and valuable, had to be destroyed. The library asked the man not to return any more books through the drop slot, but through a special outside location. Apparently, he did not cooperate, so he has now been banned from the library. Meanwhile, the library officials continue to spray for these pests that are exceedingly hard to eradicate, and can live for over a year between feedings.

A spectacular exhibition of America's Dutch heritage is being held at New York's South Street Seaport Museum. From the late 1600s until the mid-1800s, when the continent was finally freed from all foreign dominion, the contesting European powers were England, France and Spain. However, up until 1667, the Netherlands was also heavily involved, most notably in New York (or New Amsterdam as it was called in those days). It is that heritage which is celebrated in New Amsterdam: The Island at the Center of the World.

Curator Martine Gosselink from the National Archives of the Netherlands has brought an amazing collection of items to New York. Most notable is the Schaghen Letter, or "birth certificate of New York," the only documentation of the purchase of Manhattan from the Indians. Other items include the Castello Plan, the only surviving contemporary detailed layout of the colony; Adriaen Block's hand-drawn map of the larger area (including Block Island, named for him); papers from 1609 documenting Henry Hudson's contract to find a new route to Asia; the charter of the Dutch West India Company; Peter Stuyvesant's commission to become director of the colony; and the Treaty of Breda, that ceded the colony to England in 1667. The exhibition will be continuing at the South Street Seaport Museum until January 3, 2010. Here is a Link.