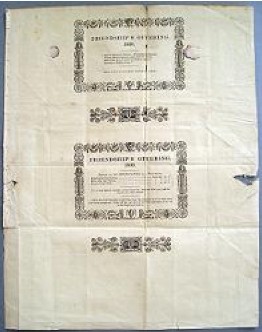 The first known dust jacket, courtesy of the Bodleian Library.

A long time ago, a bit earlier than previously thought, some printer or bookseller believed it would be a good idea to protect the cover of a book from dust before purchase. That person's clever idea was to place a paper wrapper around the book. Of course, the cover or boards already protected what was truly important - the pages of printed words within. So, this was a step removed from what really mattered, something to protect the protector, so to speak. Nonetheless, no one likes to buy something that looks dirty and dusty when it's supposed to be new. If nothing else, this was an ingenious exercise in marketing.

Fast forward from the early 19th to the early 20th century. Book publishers and sellers are becoming more sophisticated and they now realize dust covers can do more than just protect a book. Not only can they keep books from becoming less saleable, they can actually make them more saleable. Publishers could add enticing descriptions, biographies of authors, even illustrations, racy ones at that for pulp fiction. Dust jackets moved from afterthought dust protection to major advertising vehicles.

Few early dust jackets survived. They were, after all, only wrappers. Once it was time to read the book, the wrappers were thrown away, like whatever wrapping Amazon uses to ship your Kindle (save it!!! - maybe some day that wrapping will be a highly collectible, cherished antique). Collectors had no interest then. However, as dust jackets became more interesting and informative, they began to catch the collector's eye. It did not happen overnight. Fine collectors amassed libraries without dust jackets, even of books that had originally come in one. Today that would be the exception. For modern titles, meaning starting roughly around 1900, dust jackets have become de rigeur. I cannot vouch for this, but a bit of internet research tells me that many people in the trade estimate that the dust jacket may now account for as much as 80% of the value of the book. Leaving aside what this says about the importance of the content of the book, this oddity, if not absurdity, can be explained by the fragility of the jacket. Far fewer survive than do the underlying books, and they are much more likely to be torn or suffer other condition defects. Indeed, anyone with seriously collectible books today will purchase a cover to protect the jacket, which protects the covers, which protect the book. Oh hear the word of the Lord. Perhaps someday someone will invent a jacket to protect mylar covers.

So for those who appreciate dust jackets and understand why they can possess 80% of the value, or four times that of the book itself, there is some exciting news from the Bodleian Library at Oxford in England. They have discovered the oldest known dust jacket. It is from 1829, making it a couple of years older than the previously oldest known example. This jacket was made for the book Friendship's Offering. It is actually more informative than many later jackets, noting the book's price (12 shillings) and that it is "elegantly bound," plus it includes an advertisement for the Friendship series of books. The wrapper had come to the library through an auction purchase in 1877, but somewhere along the way became separated from the book. The jacket was discovered by the former Head of Special Collections in the 1970s, but it took a while for the library to get around to announcing the find.

We won't hazard a guess as to the value of this jacket. If dust jackets represent 80% of the value, I guess the first dust jacket should be worth four times as much as the first book, the Gutenberg Bible. Of course this may underestimate the dust jacket's value, since Gutenbergs are common, this jacket rare. Or perhaps the logic is flawed. The dust jacket was an interesting development, but hardly on a scale with the invention of printing.


Editor's Note: We have received a couple of Letters to the Editor on the subject of dust jackets, including one announcing a website and upcoming book pertaining to 19th century jackets. Here is a link to Letter to the Editor.