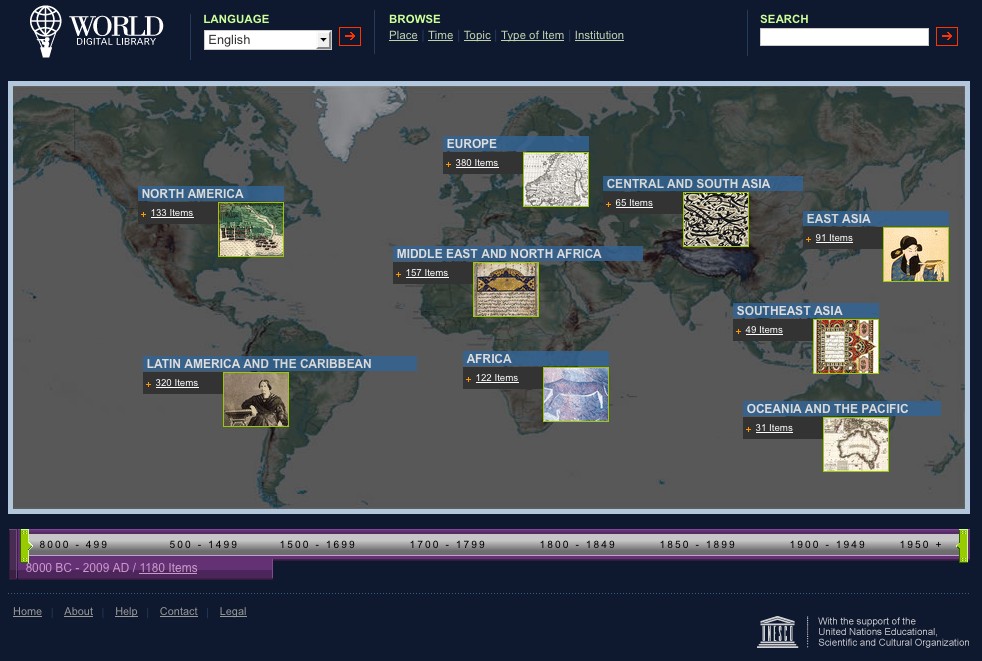 The World Digital Library opened for business on April 21. As the name suggests, there are no desks, stacks, or librarians whispering "shhhh..." This is an online collection promoted by UNESCO, the United Nations Educational, Scientific and Cultural Organization, with much assistance from the U.S. Library of Congress. Its beginnings are relatively small, but there are no preset limitations as to what it may become in the years ahead. From a beginning of five, there are now 32 contributing libraries, and the doors are open for many others to join.

The project was initially proposed by James H. Billington of the Library of Congress in 2005. As of the opening, there were 1,140 items posted from the 32 libraries, with something about every country a member of UNESCO. The site is searchable in seven languages as well as via a timeline. Contributions come from national libraries of nations as large as China and Russia, as small as Uganda and Qatar. Displayed are books, manuscripts, movies, maps, photographs, journals and recordings. Visitors have access to both the original works and descriptions of them provided by the international librarians. For example, those interested in early Americana will find a digitized copy of Sir Francis Drake's The World Encompassed. There are pre-1900 movies from Lourdes, France, by the pioneering Lumiere company, a seventh century Chinese manuscript "Annals of Creation," and a lettered 1200 B.C. oracle bone. While the total number of items may sound relatively small at this point, the detail of information provided makes this both an informative and exciting place to visit. To book your trip, click here.

A joint agreement to upgrade the e-commerce of the ABAA (Antiquarian Booksellers Association of America) website was recently announced. Book listing website Biblio.com will provide the search engine and e-commerce aspects, while Bibliopolis will provide the design work. The joint operating agreement will run for the next four years.

The ABAA was formed in 1949 and currently has 450 members. They opened their site to e-commerce in 2000, and are now looking to expand their offerings. Among the plans for the upgraded site are expanded search capability, higher resolution photographs with zoom capabilities, and the ability to order books from multiple dealers at the same time. Biblio brings significant experience in online bookselling and high-volume listings to the table. They are the third largest used book seller (after AbeBooks and Alibris) with 50 million online listings.

The Rosenbach Museum and Library of Philadelphia will be hosting an exhibition entitled Finding Lincoln opening this month. The museum is already hosting an online exhibit called 21st Century Abe in honor of Abraham Lincoln's 200th birthday. Like its online counterpart, the live exhibition combines recent art, interpretation, and commentary with a collection of documents and materials from Lincoln's lifetime, including letters and speeches. The live exhibition runs from May 27 - August 30, 2009.

An exhibition entitled Landmarks in Law Reporting will be taking place from now through October at the Lillian Goldman Law Library at the Yale Law School in New Haven. Law reporting may not sound important at first, but in the Anglo-American jurisprudence system, it is case law which determines what the common law and legislated rules mean. The exhibit begins with a manuscript collection of cases from the reign of Edward III, copied around 1450. It includes first editions of reports from Plowden and Coke, the first American case reports from Connecticut in 1789, and the first U.S. Supreme Court cases from 1798. The evolution of reporting from manuscript to print, the growth of legal publishing, the connections between legal reporting and education, and the growing need for well-organized reporting of the huge number of cases being decided will all be on display. The exhibition is curated by Rare Book Librarian Mike Widener. If unable to attend, you can follow the exhibition on the Rare Books Blog.