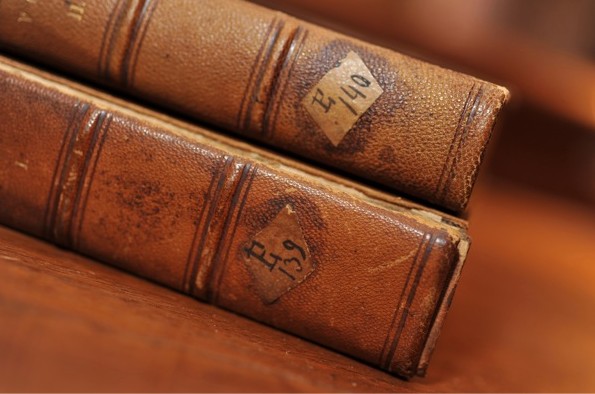 Consecutive numbers showed this to be Washington and Lee's copy.

We don't know whether Mike Dau read the story about the Iowa woman who spent several hours in jail over a six-month overdue library book, but we will guess not. If so, he must have approached the Washington and Lee University Library with great fear and trepidation last month. Mr. Dau was returning a book that had been removed a bit longer ago than six months. It was, in fact, 145 years, or to be precise, 52,858 days overdue. On a fairness basis compared to the lady in Iowa, he probably should have been executed, but instead he walked away a free man. He didn't even have to pay a fine, which based on the current rate of $1 per day, would amount to $52,858. Librarians (excluding those from Iowa) are a forgiving lot.

This story goes all the way back to the Civil War. On June 11, 1864, Union forces attacked Lexington, Virginia, home to what was then simply Washington University. Union soldier C.S. Gates swiped the book, volume one of the four-volume set History of the War in the Peninsula and in the South of France, by W.F.P Napier. Gates was obviously not a book collector, as it is foolish to take one volume of a larger set, and this is not a particularly valuable book anyway, not even after all of these years. However, Gates did not have time to conduct a full appraisal. A handwritten note from Gates inside the book indicates he thought he was taking it from nearby Virginia Military Institute, not Washington University, and he was probably more interested in sticking it to those rebels. Alternatively, he may have just been trying to save the book, as his note continues, "The Institution was burned by the order of Gen Hunter." Actually, Gates was only half right. Union troops did burn down the VMI library, but not the Washington from which he took the book, but with the two institutions side by side, it is easy to see how he became confused.

Gates made it back home after the war, and while we don't know whether he ever read this book, he certainly did not throw it away. Neither did his descendants. The book was handed down through generations of the Gates family, until it reached the last in the line, Myron and Isabel Gates. When Mrs. Gates died, she left it to her Lake Forest, Illinois, neighbor, Mike Dau. So explains how Mr. Dau ended up with this book so many years later.

In time, Mr. Dau concluded this book belonged with its rightful owner, and after some sleuthing, he determined that it was Washington and Lee. His conclusions proved correct when the book was matched to volume 2, still in the library's possession. In these pre-Dewey Decimal days, the library marked their books with simple numbers. Mr. Dau's volume 1 is labeled, "139," while volume 2 is labeled "140." The reunion was complete. However, it should be noted that the remaining volumes are still missing, and anyone possessing them should be forewarned that Washington and Lee might not be so forgiving of people who hold onto to their overdue books for longer than 145 years.

Legalistic Footnote: For those with a legalistic mind, it is clear that Washington and Lee University was the owner of this book, not Mr. Dau. There have been several cases lately, including one involving North Carolina's copy of the Bill of Rights, taken by a Union soldier in the waning days of the Civil War. The courts found for North Carolina over the most recent possessor, and undoubtedly would have found the same here, excepting the value of this book would not have warranted a suit, and Washington and Lee would have remained in ignorance had not Mr. Dau come forward to return the book.