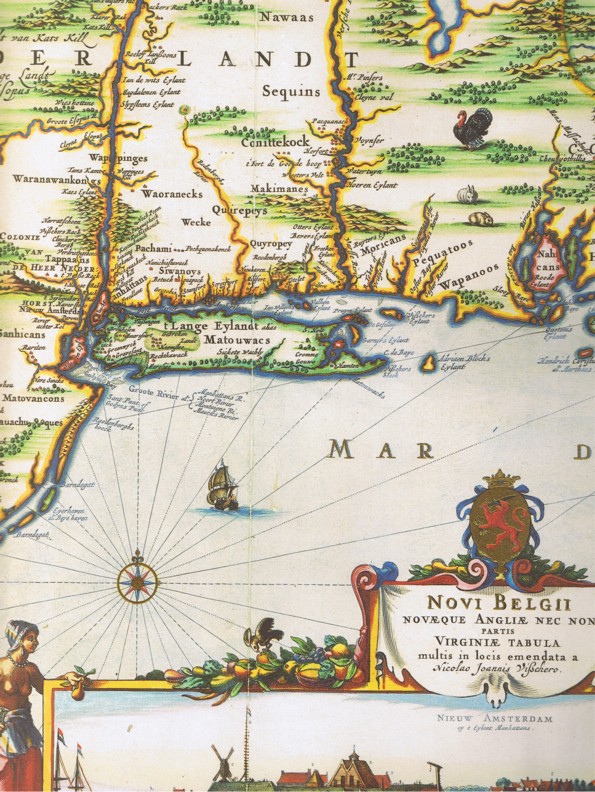 Part of what is today the northeast coast of the U.S. from the Blaeu atlas.

Hes and De Graaf Publishers of the Netherlands has announced a major publishing project, a facsimile on a grander scale than any we have previously seen. They are in the process of publishing an eight-volume facsimile of the non-European sections of the 1660-1663 Blaeu Atlas Major, as supplemented by the 17th century Amsterdam attorney and collector Laurens Van der Hem. This uniquely supplemented "grand atlas" includes four volumes of maps and manuscript notes created for the Dutch East India Company (VOC). The original is held by the Austrian National Library in Vienna. Now offered is a spectacular facsimile of the sections pertaining to Africa, Asia, and the Americas. Only 100 copies will be printed, and each will be assembled and bound by hand to order.

The Blaeu "grand atlas" was the highpoint of the exceptional Dutch atlases of the 16th and 17th centuries, arguable the greatest atlas ever produced. The original, which includes several volumes on Europe, is lavishly illustrated with town views, images of buildings, natural scenery, etc., and is filled with maps and charts. The Hes and De Graaf facsimile does not include the European volumes, but instead contains the material Van der Hem added to his copy. Laurens Van der Hem added numerous maps, drawings, manuscripts, and text to his copy that he thought belonged. Most notable are four volumes of manuscript maps and views created for the Dutch East India Company (the "secret" atlas), normally reserved for use by officers of that institution. Van der Hem died in 1678, and his heirs sold his copy to Prince Eugene of Savoy in 1730. His heir and niece, Victoria, eventually sold the copy to the imperial library in Vienna, now the Austrian National Library.

Hes and De Graaf has used fine materials to recreate the appearance of the great atlas. The paper selected replicates the original used by Blaeu while being more suitable for folding of the large maps and designed for greater strength. The pages are bound by hand in vellum bindings with gilt ornaments and gilded edges. The aim is to recreate 17th century beauty and authenticity with 21st century durability. The latest techniques in reproduction are employed to provide the highest fidelity to the original plates and maps, including the color.

Along with the Blaeu atlas and VOC volumes, and Van der Hem's additions, there is a supplement providing detailed information about this facsimile edition. It includes not only details about the production of this edition, but information about Blaeu, Van der Hem, and a description of the varied material within the atlas.

The Blaeu-Van der Hem atlas has been registered on the UNESCO list of "the memory of the world" since 2004. That was also when preparation began for the creation of this facsimile edition of the American, African, and Asian volumes. A presentation of the new edition is scheduled for April at the University of Amsterdam, with another slated for Vienna in June.

The Blaeu-Van der Hem facsimile edition has been priced at €79,500 within the European community (VAT included) or €75,000 elsewhere (roughly $98,900 in US dollars). We suggest that those who might be interested in obtaining a copy of this magnificent work contact Hes and De Graaf at +31 (0)30 6380071 or info@hesdegraaf.com for additional information or to obtain a prospectus.