What Happened to the American Discount? 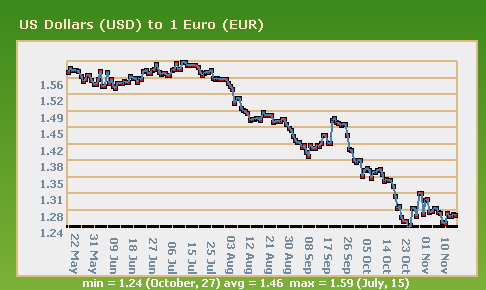 Collapsing US dollar from Exchange-Rates.org.

These have been tough times for booksellers, American ones in particular. The advent of intense competition as a result of online listing sites and eBay has changed the face of bookselling over the past decade. Many traditional booksellers, particularly those with bricks and mortar stores, were forced to close their doors. As if this wasn't enough, the collapsing economy, first in America, but now spreading across the world, came at an already difficult time for the trade. Now, as the economy sinks deeper into recession, discretionary spending, a synonym for book buying, slides along with it.

However, through the difficult times of the past few years, there has been one bright side for the American bookseller. The collapsing US dollar has made books sold by Americans relatively cheap in Europe. Strong euros and British pounds enabled Europeans to buy books priced in dollars for a song, or at least, a comparative bargain. Many American booksellers took advantage of this situation to increase their overseas sales, even as domestic ones languished. Don't look now, but something has been happening the past few months that threatens this last refuge of prosperity for the American bookseller.

That once maligned dollar has suddenly gained surprising strength. It has enabled European and other overseas merchants to become more competitive in the U.S. It is part, though certainly not all of the reason that the price of oil, and with it gasoline, has collapsed so spectacularly over the past couple of months. Unfortunately, the flipside of cheaper foreign goods for Americans is more expensive American goods for foreigners. Those incredibly cheap rare and antiquarian books overseas collectors were buying from American sellers just got more expensive. Actually, they got a lot more expensive. The effective price of books sold by Americans to Europeans has been rising rapidly over the past few months, and yet the American booksellers don't get to see one penny of these increased costs. All they get are the decreased sales that come with increased prices.

Back in 2001, you could only buy $.85 worth of books for 1 euro. Three years ago, a euro still only bought $1.15 worth of American goods. It then began a steady climb, reaching $1.31 two years ago, $1.47 a year ago. By this past July, the value of the Euro had soared to $1.60. In effect, Europeans were getting a 30% discount versus three years ago, almost half off compared to 2001. Then the euro began to tumble compared to the dollar. In a mere four months it dropped from $1.60 to $1.25. To put it another way, Europeans saw the price of books offered by American sellers increase in price by 30% in four months, all because of an adjustment in exchange rates.

While the pattern of the British pound has differed from the euro, it too has suffered a stunning decline. A year ago, it peaked at a value of $2.10 per pound. As recently as July it was still over $2.00. Last month, it sank below $1.50. For the British buyer, that's an increase in cost of American books of 35% in four months.

There may be some consolation for the European bookseller here in that their wares are much less expensive for American collectors than they were this summer. However, one wonders how many American collectors can afford to take advantage of these discounts today.

In time this will all change. No one knows when, and it is likely good advice to hunker down for a while. This could be a long winter. The book trade could look quite different when spring returns, but return it will. Prosperity is just around the corner.