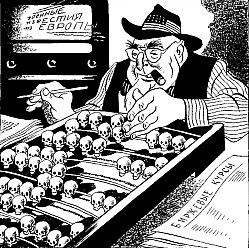 A prolific political cartoonist passed away last month. His story is one of the more remarkable ones you will hear. Boris Yefimov is not a name well known in the West, but he was the preeminent cartoonist of the old Soviet Union. He lived to see the entire span of that empire from the inside, from its violent birth through its growth to major world power, and finally its very public collapse and death - all 70+ years of it. What's more, Yefimov saw almost two decades of Russian life both before and after the existence of the Soviet Empire. He was 108 years old when he died.

Boris Yefimov was born in 1900, son of a shoemaker, with ambitions to be a lawyer. In 1911, his father took him to watch Tsar Nicholas II drive by in his coach. He was not impressed. While Boris was not that politically astute, his brother, Mikhail, was. Mikhail was a student, soon to be journalist, when the Revolution broke out in 1917. He soon joined the cause, and by 1919, Boris followed suit. After Mikhail found work in the newspaper business, he invited his younger brother, who had shown a penchant for drawing, to apply for work as a cartoonist. Boris quickly became popular for his drawings.

While Boris never gained personal political influence (thankfully, as this enabled him to be a survivor), he became acquainted with the leading figures of the time. He met Lenin and Bukharin, and was a particular favorite of Trotsky. The latter was so fond of Yefimov's work he agreed to write an introduction to his first book of cartoons. Yefimov's publisher was reluctant to print the introduction, as by 1924, Trotsky and Stalin were becoming rivals, a rivalry in which Trotsky fared quite poorly. Still, the introduction was printed, and the editor paid for that decision with his life. Stalin had him executed. Yefimov was untouched.

Through the 1930s, the cartoonist would plod along doing the regime's bidding. He drew many cartoons of the show trials Stalin staged, appropriately displaying Stalin's rivals as villains. However, not even the greatest displays of loyalty guaranteed safety in Stalin's Soviet Union. Mikhail had many years earlier shown too much deference to Trotsky, and while Stalin could delay judgment, he never forgave. He had Mikhail carted off to the gulag in 1938, and about a year later, had him shot. Boris packed his suitcase when Mikhail was first taken away, as Stalin's custom was to punish his enemies' families as well. However, the knock on the door never came. Boris lost his job, but not his life.

Yefimov's unemployment lasted about as long as his brother's imprisonment, but with a much happier ending. He was rehired as a cartoonist. Yefimov attributed his remarkable survival to Stalin's enjoying his cartoons. He had a talent Stalin appreciated and perhaps felt no one else possessed. This began the greatest time in his career, though he faced his days in constant fear that at any time, some unperceived slight could result in Stalin's wrath and his sharing his brother's fate. Yefimov went to work drawing cartoons of Hitler and the Nazis, ones that portrayed them as the lowly beasts they were. The cartoonist shared these low opinions of those he mocked, so it was easy to put his heart into his work. Hitler placed Yefimov on a list of people to be killed once the Nazis overran Moscow, but he survived this tyrant as well, and lived to attend the Nuremberg trials and draw caricatures of the German war criminals.

After the war, relations between the Soviet Union and the other allied powers broke down, soon to be followed by the Cold War. Yefimov now had to picture western leaders, including Winston Churchill whom he admired, as villains. He complied. He depicted Churchill looking in a mirror and seeing Hitler's image. There was no choice. Either you pleased Stalin or you, and probably your family, would be executed. He went with the lesser of two evils. He would note in later years that he believed, or at least convinced himself, that horrible depictions of the West generated by the Soviets were probably true, so that he was supporting a government that was less evil than the ones he mocked. Sometimes survival requires convincing yourself of things you don't really believe.