<i>In The News:</i> A Competitor for Google, A Book Show in Baltimore 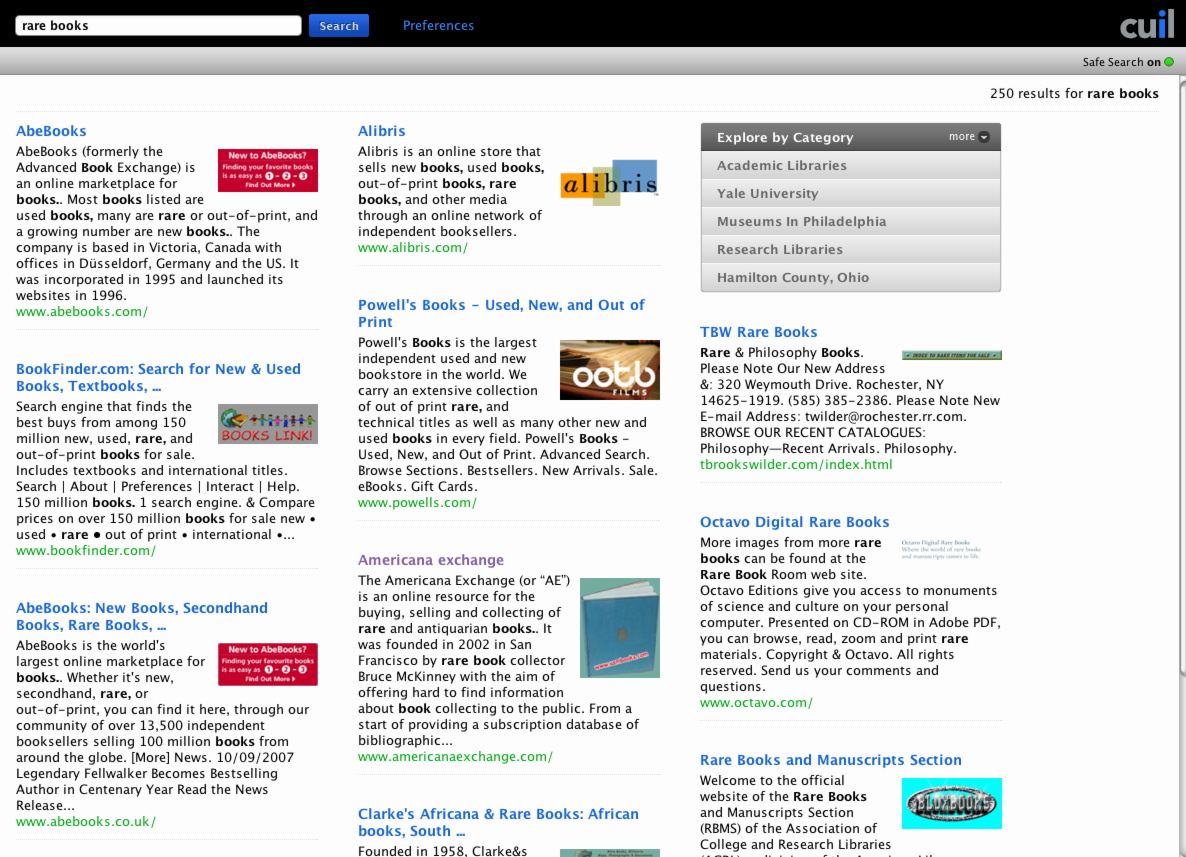 Cuil's results from a search for "rare books."

A new search engine emerged with much fanfare this past Monday (July 28) to challenge Google's hegemony. The name is Cuil (pronounced "cool"). Cuil is not the only recent attempt to start a new search engine, but its pedigree is what has enabled it to garner much press attention. It is headed by Anna Patterson, who sold technology to Google to upgrade their searches in 2004, and her husband Tom Costello, a former Google engineer. Their names are enough to make you at least stop and look.

Cuil's search page looks much like Google's, except in reverse (the background is black instead of white), but the results page is much different. Instead of a vertical listing of results with a very brief description, Cuil provides columns of matches with a paragraph of description and an image. You are able to see more about the site with Cuil before you decide whether to go there. That's an advantage. Of course, that means it will take you longer to evaluate which sites to visit than with Google's more terse descriptions. In today's world where people believe every second counts, that's a disadvantage. So your choice may be a matter of taste.

In an interesting twist, Cuil does not necessarily extract its information from the site itself. We were surprised to see the description of the Americana Exchange site was taken not from here, but from Wikipedia. Obviously Cuil is doing some sophisticated searching and matching.

Cuil says it uses new technology to better analyze relevance to your keywords. Perhaps, but while the matches we found were at times substantially different from Google, it was not clear why they were superior. Cuil does provide a new feature - a box that allows you to "explore by category." Some make sense, some don't. For "rare books" it recommends academic libraries and research libraries, but also Hamilton County, Ohio. Are there an unusual number of rare books in Hamilton County, Ohio? Who knows?

One feature we do appreciate is Cuil's privacy policy. Unlike Google, they claim not to gather any information about their visitors, not even by IP address. They don't remember where you've been, which is fine, because that's none of their business...or Google's.

Most interestingly, Cuil says it searches 120 billion pages. It says this is three times as many as Google, but this is not certain. Google does not give out numbers. Google may actually search more, but that does not mean it displays all. This has been an issue in the book trade of late, as listings from various book listing and dealer sites no longer show up as often as they once did. Other times they appear under the dreaded "repeat the search with the omitted results included" link. No one sees them there. Google says it does this to avoid duplication, but many listings that consumers might like to see, perhaps copies offered at lower prices, are lost by Google's decision to limit matches. Booksellers may well like to see a competitor to Google that opens up more of their listings for consumers to decide which they want to pursue.