Throwing in the Towel: Microsoft Abandons Its Book Search 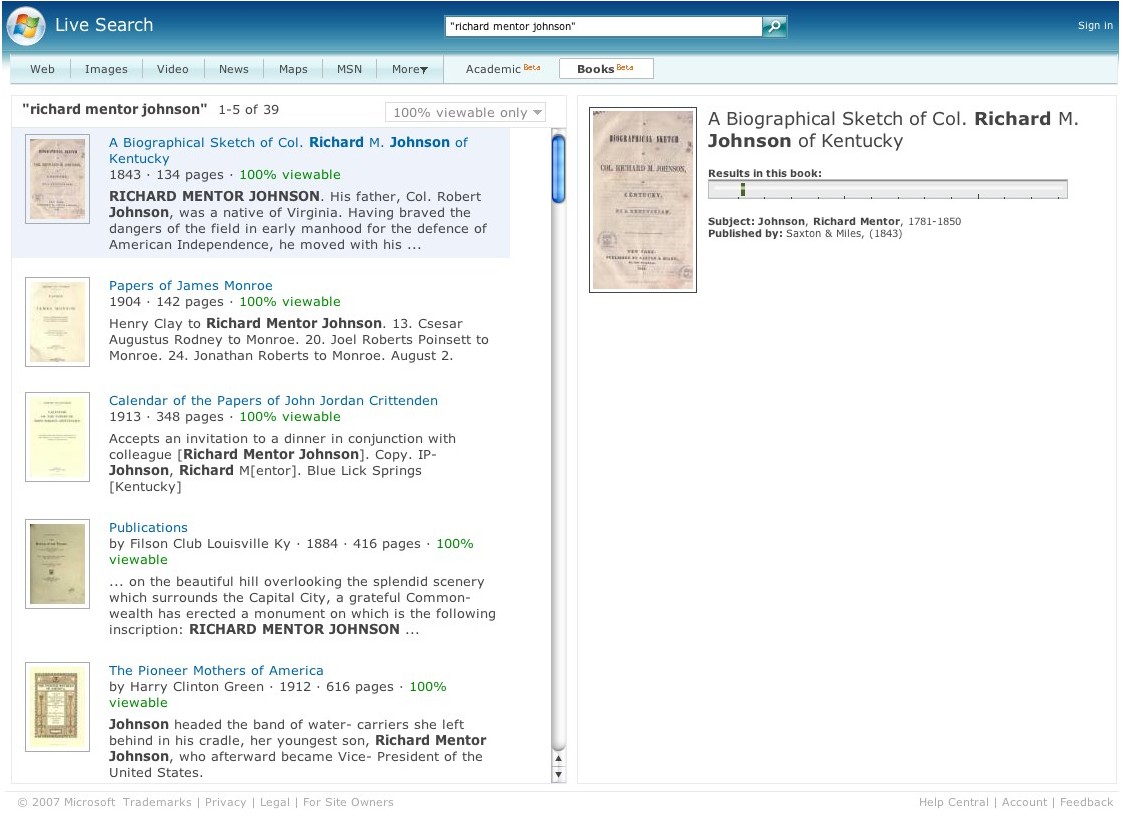 The announcement kind of slipped under the radar, but its impact is enormous to the future of the digitization and online availability of the texts of millions of books. Microsoft obviously wanted the notice to be low key. The software giant announced in late May that it is pulling the plug on their massive book digitization program, Live Search Books, along with its less well-known Live Search Academic. It clears the way for Google to control the field by itself. Maybe...

Microsoft launched Live Book Search two years ago. It was not an original idea. In fact, it was almost an exact duplicate of Google Book Search. And, the more scholarly Live Academic Search was almost a carbon copy of Google Scholar. Google had already launched its book search, a massive digitization process. It worked with several large university and other institutional libraries to scan millions of books, primarily older ones out of copyright, but some newer ones as well. Google invested millions of dollars in the project, which continues to be rolled out today.

The Live search site is Microsoft's attempt to challenge Google in the search business. As part of that challenge, Microsoft set about duplicating just about all of the major, and some not-so major services that Google offers. Within the books field, those services were Book Search and Scholar. Microsoft began lining up its own collection of prestigious libraries, purchased scanning equipment for them, invested millions to provide the manpower, and created a book search site that rivaled Google. When we looked at it last December (click here to see our review), we found it to compare quite favorably to Google's. It had everything... except visitors. Raw numbers might sound acceptable, but compared to what Google pulls, whether it be for its book search or basic search, Microsoft's Live is miles behind.

Still, considering the investment made and apparent commitment, Microsoft's decision to pull the plug came as a major surprise. Not even the libraries working with the firm had an inkling this was coming. The implications are huge. In effect, Microsoft has thrown in the towel, at least in terms of attempting to provide the depth of search options Google offers. They will target their offerings to those fields they believe have broader audiences, while abandoning the attempt to be equal to Google.

In typical convoluted corporate-speak, Microsoft announced, "Given the evolution of the Web and our strategy, we believe the next generation of search is about the development of an underlying, sustainable business model for the search engine, consumer, and content partner. For example, this past Wednesday we announced our strategy to focus on verticals with high commercial intent, such as travel, and offer users cash back on their purchases from our advertisers." In English, this means that Microsoft intends to focus on popular areas, such as travel, and its new cash-back program for people who locate goods through a Microsoft Live search. They figure the big money is there. They will leave the specialty searches to Google, and hope that conceding this part of the territory to their rival does not prevent them from competing equally in the more lucrative fields. This is certainly a major about-face from their strategy of two years ago.