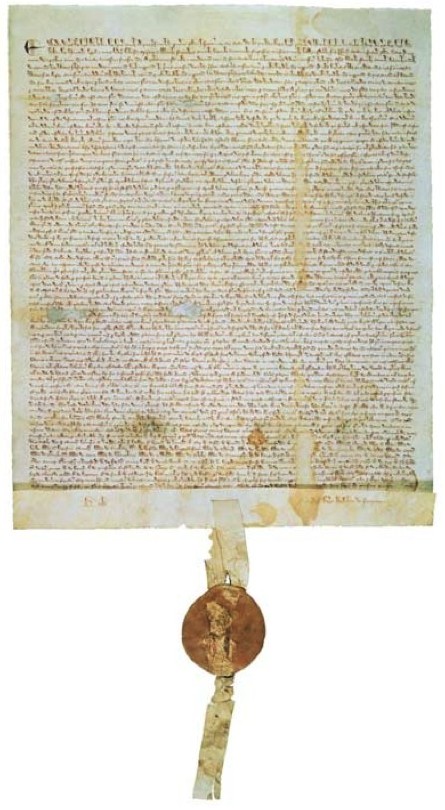 1297 Magna Carta, recently auctioned by Sotheby's, is back on display in Washington.

A copy of the Magna Carta has found its way back home to the National Archives in Washington. Of course, this is not the original home for this document. It resided in England for almost 700 years after it was inscribed in 1297. However, while all but one other of the few remaining 13th century copies of this bill of rights, first created in 1215, remain in England, this one was brought to America in the 1980s by Ross Perot. His Perot Foundation purchased it, and almost immediately put it on display at the National Archives. It remained there until last year, when the Perot Foundation put it up for sale at Sotheby's. There it was purchased by investor David Rubinstein, a former advisor during the Carter administration and founder of the Carlyle Group, for $21.3 million.

Fortunately for Americans, Rubinstein believes a copy belongs in the U.S. for Americans to appreciate too. This is reasonable enough, for while this document is English in origin, the freedoms it guaranteed inspired America's Declaration of Independence and some of the rights enshrined in its Constitution. So, once again the Magna Carta is on view at the National Archives, and hopefully will remain so for a very long time.

AbeBooks announced its highest price sales for February, and as always, these lists provide a curious mix of titles. This list features an American novel classic, a rambunctious young lady, a Christian Science first, butterflies, and the man we used to be referring to when we said the name "Dylan."

9. Over Sea, Under Stone, a first British edition inscribed by author Susan Cooper. $4,000.

6. Le Centaure, a limited edition of the work by French poet Maurice de Guerin with 73 wood engravings by Claudius Linossier. $4,200.

3. Gone With the Wind, a signed first edition of Margaret Mitchell's southern classic. $5,500.

2. Eloise in Moscow highlights five volumes in the life of the precocious six-year-old, signed by author Hilary Knight and illustrator Kay Thompson. $5,852.

1. Sefarad: Revista del Instituto Arias Montano de Estudios Hebraicos y Oriente Próximo by Consejo Superior de Investigaciones. That's a mouthful, but then again, this consists of 63 volumes, from 1941-2003, covering the Bible and the history of the Jews in Spain. $7,265 (or just $115 per volume).